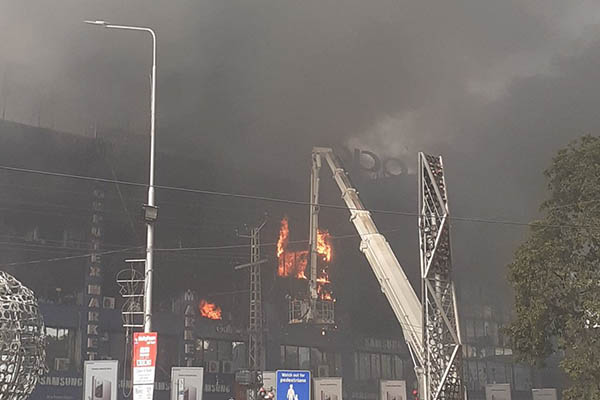 A massive inferno broke out at Lahore’s Hafeez Center on Sunday, inflicting heavy losses to what has been described as the largest complex catering to electronic items in the city.

The fire erupted in the morning, reportedly due to a short-circuit though police say investigations are still ongoing, and lasted well into the night, releasing a dark plume of gray smoke that left the surrounding areas under a shadow of darkness.

No loss of life has been reported as the otherwise bustling building was mostly empty on Sunday; according to police, 25 people who had been within the building at the time of the fire were all successfully rescued. However, traders have said that more than 400 shops, repair facilities and storage warehouses have been completely gutted, destroying stored housing mobile phones, laptops and other computer-related hardware.

The fire started on the second floor of the building and appeared to be under control by Rescue 1122 firefighters before spreading to the third, fourth, and fifth floors. During the firefighting, traders with shops on the lower floors could be seen scrambling to remove their wares; some succeeded, while others could be seen despondent with nothing to show for their efforts. Others, realizing their shops had no chance of being saved, could be seen weeping on the sidelines as their lives’ work went up in smoke.

Union leaders of Hafeez Center, at the site, accused Rescue 1122 of initiating the firefighting operation too late with insufficient resources. As it became clear the government’s resources were proving ineffective, the firefighting vehicles of other city district governments, Pakistan Navy and Bahria Town were also dispatched.

Punjab Health Minister Dr. Yasmin Rashid visited the site to represent the government, but face resistance from traders who criticized her for interfering in an incident that was beyond her ambit. “You are not needed here. Go back and do your original duty [as health minister],” shouted one trader. Others could be heard shouting “Nawaz Sharif Zindabad,” reflecting the frustration of the public with the incumbent government.

A spokesperson for Rescue 1122 rejected claims the organization had delayed its response, causing greater damage than expected. In what has become routine for this government, he blamed the victims for not upgrading the building’s emergency firefighting equipment. In a media interaction, he said the building’s smoke detection alarms and water hydrants were inoperable, adding many of the shops had highly inflammable material that had made firefighting a difficult prospect. He hailed Rescue 1122 officials for preventing the flames from spreading to lower floors.

Authorities have said a 14-member inquiry committee has been set up to probe the Hafeez Center incident. According to a notification by the Punjab government, Deputy Commissioner Mudassar Riaz would serve as convener of the committee; with assistant commissioner Model Town, SP Model Town, and chief engineer building central zone as its members. The committee has been tasked with probing the incident and submitting a report to the commissioner within seven days.