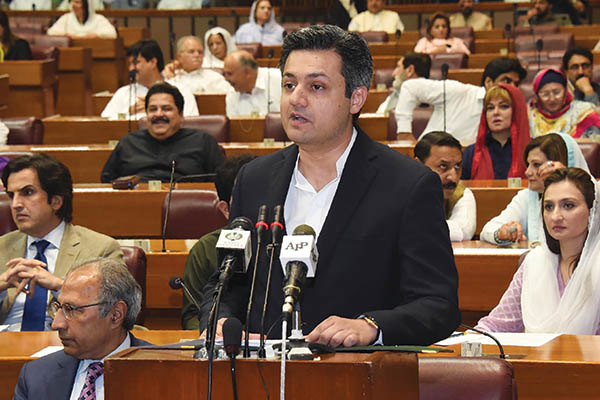 Opposition parties in Pakistan’s National Assembly on Tuesday slammed the government for record-breaking inflation, as Economic Affairs Minister Hammad Azhar continued the Pakistan Tehreek-e-Insaf’s policy of placing all blame on former ruling parties—despite having now been in power for 18 months.

Pakistan Muslim League (Nawaz) leader Khawaja Asif initiated the debate, urging the government to address inflation on priority basis. Referring to the massive price hikes in the sale of sugar and wheat, he demanded the government take all beneficiaries of the crisis to task. “[The] Pakistan Tehreek-e-Insaf leadership has not fulfilled the promises made with people of the country during their tenure of opposition,” he said, claiming that the national economy had significantly deteriorated under the PTI-led government.

Asif claimed that the PMLN government, during its five years in power, had ended the gas and electricity crises that had long plagued Pakistan; eliminated terrorism; and restored peace to Sindh capital Karachi.

Following Asif’s harangue, Pakistan Peoples Party (PPP) leader Bilawal Bhutto-Zardari took the floor and directly blamed Prime Minister Imran Khan’s “incompetence” for the economic crisis. “This government has sunk a fledgling economy it had inherited from its predecessors … unemployment and poverty are at their highest level,” he said, adding that statistics showed that prices of food items had climbed by 78 percent in the 18 months that the PTI has been in power.

Criticizing the government’s bailout program with the International Monetary Fund (IMF), Bilawal said it had been “negotiated poorly” and had compromised the rights of the people of Pakistan. He also hit out at the government’s claims that it had resolved pending debts by pointing out that the PTI had borrowed Rs. 11,000 billion in loans since coming into power, against the Rs. 6,000 billion that had been borrowed in the past 61 years.

“When you have a ‘selected’ government, then there is no regard for the people’s suffering,” he said, alleging that Prime Minister Khan would never reached his office without the support of the chief of the Inter-Services Intelligence agency. To this, Speaker Asad Qaiser admonished Bilawal and had his remarks expunged from the official record of the proceedings.

Responding to the opposition, Economic Affairs Minister Hammad Azhar sought to reassure the masses that the country was headed toward progress and development. Admitting that inflation had increased due to the actions taken by the government in a bid to improve the economy, he said measures were underway to provide relief to the suffering masses.

Azhar claimed the price of wheat had been stabilized in three provinces while efforts were being made to reduce the price in Sindh. He said fertilizer prices had been decreased by Rs. 300 to Rs. 400 per bag, adding negotiations were underway to further decrease these rates. He also hoped the price of sugar—an industry primarily under the control of PTI lawmakers—would come down shortly.

The economic affairs minister blamed the rising price of electricity on “expensive tariff agreements” signed by the PMLN government, and accused the previous regime of taking gas companies from profit to deficit.

“The journey to development has started… we are expecting high growth in future,” he said, noting the PTI had brought the current account deficit down by 84 percent, while the market-driven currency exchange rate had been stable at Rs. 155 to the dollar since June 2019.

As in routine with PTI lawmakers, Azhar accused the PMLN government of “wasting” $20 billion to artificially stabilize the exchange rate. He claimed the PTI-led government had cleared short-term liabilities worth Rs. 400 billion, adding it had paid off over $10 billion of debt in its first year in power.

Azhar said the government was determined to reduce the circular power debt to zero by December 2020.