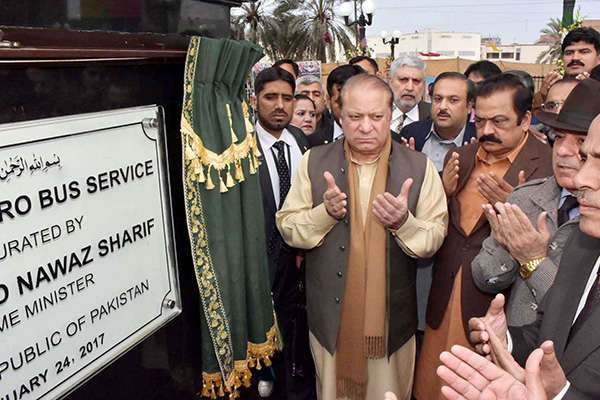 Roads and transport services are an essential precursor to societal progress.

Pakistan’s rhetoric-laden media is debating the merits of infrastructure development even as “all-weather” friend China celebrates the launch of its first direct freight train—34 containers across 7,456 miles in 18 days—to the United Kingdom. On Jan. 24, Prime Minister Nawaz Sharif triumphantly inaugurated a metro-bus service in Multan. Within hours, commentators on TV had rubbished the idea, claiming he should have used the funds to either open new hospitals and schools or refurbish preexisting facilities.

The ruling PMLN’s political opponents believe Pakistan doesn’t need infrastructure as much as it does better education and health facilities. “New Pakistan,” they say, lies in educating Pakistani citizens. They dismiss the grand infrastructure China-Pakistan Economic Corridor (CPEC) project as extravagance that will little serve the common man. Media coverage of schools and hospitals in the Punjab province pointedly highlights that the Lahore-based government has failed its job, neglecting rural development in favor of bolstering Chief Minister Shehbaz Sharif’s hometown. There is no denying that education and healthcare are essential to human development—but they do not exist in a vacuum.

Traditionally, roads are linked to all kinds of progress. Even the opposition’s much-vaunted education and health outreach is often dependent on how accessible a remote location is. A group schoolboys in Gwadar telling a TV anchor they want education first and CPEC later makes for a good sound-bite, but ignores how that education will depend on whether Gwadar can attract private investment into school-building and trained teachers from larger, more developed cities. Even state-run schools would—and do—find it difficult to transfer teachers from Karachi to Gwadar if the existing infrastructure presents the Balochistan city as a “hardship posting.”

The Economist, in a recent article, betrayed its bias when it claimed the Lahore-Islamabad motorway was a useless indulgence because of its “scant traffic.” It ignored how the same road network has helped people along its route find better education, business and, yes, even healthcare opportunities. Education and health, in a third-world country such as Pakistan, must be a state sector. However, financial constraints, poor maintenance and population pressure—to say nothing of the primitive curriculum in schools that would require years to overhaul—soon degrade both. But it isn’t a matter or choosing one over the other; education and healthcare must go hand-in-hand with infrastructure development for overall progress. If the same opposition had existed then, the famed Grand Trunk Road built by the British Raj would never have been completed. And what is now Pakistan would have forever remained “backward.”

What crude thinking, the new asphalt allows me to go to a hospital.. regardless if the hospital is a dump.