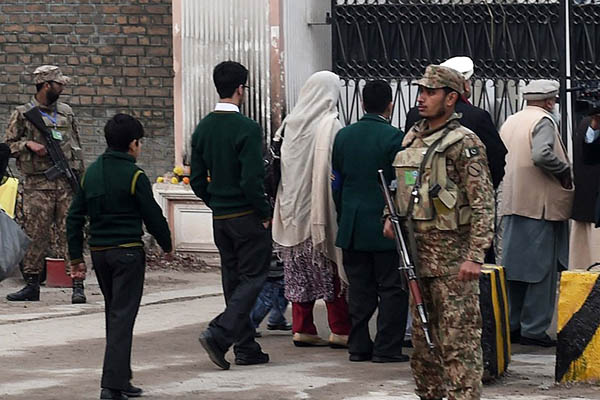 One of the survivors of the Peshawar massacre returns to the Army Public School with mixed emotions.

A month after the Pakistani Taliban attacked the Army Public School (APS) in Peshawar, killing 150 people—mostly schoolchildren—the institute has reopened with increased security and vows to prevent militants from ever again targeting Pakistani children. But the incident continues to haunt 13-year-old Tahir Ullah, a 7th grade student who lost a brother and cousin in the massacre.

“We would wake up early in the morning and compete to see who could get ready for school fastest, but now I am all alone,” he told Newsweek of his brother a few days after classes had resumed on Jan. 12. “There is no one to accompany me to school and I can’t stop thinking about [the events of Dec. 16],” he added.

Tahir’s brother, 15-year-old Yasser Ullah, and cousin, Syed Zulqarnain Shah, were in the school auditorium targeted by the Taliban’s brutal assault and were among the first students to be killed. Tahir says he can’t even pass his elder brother’s old classroom without being overcome by grief. “Around 20 students of my brother’s class were shot dead by the terrorists,” he says. “The school used to be full of students’ chatter but now the halls are silent.”

Tahir was returning to class from the bathroom when he first saw the militants. “I saw two gunmen, one with a long beard and another who was clean-shaven, running toward the auditorium,” he says, adding that he rushed back to his classmates and tried to warn them but they thought he was joking. “After a few moments, we heard the gunfire and hid under our desks,” he says. While his classroom was near the auditorium no militants entered it. “Some injured students, soaked in blood, sought refuge with us. They were crying and in pain,” he says of Dec. 16. “I was worried about my brother and cousin, who were both in the auditorium,” he says. “But I couldn’t do anything. We all expected to be killed any minute … every time we heard the sounds of boots, we were sure it was our turn.”

Tahir says he has trouble concentrating in class since he returned to school. “I am trying to return to my studies but am finding it hard to overcome the tragedy,” he said. He said he broke down and wept during class on his first day back, but his friends and teachers have helped him work past his grief.

Yaseer and Zulqarnain’s deaths and Tahir’s ordeal have taken their toll on the entire family. Razia Bibi, Yaseer and Tahir’s mother, says she had never visited APS prior to her son’s death. “I am illiterate. Everything I know about school, I was told by my son—schoolyard jokes, the playground—but now all I see is barren land,” she said of her first visit. “There are no more tears in my eyes. We weren’t allowed to see what happened inside but we shared our grief with other bereaved families,” she said. “Oh God let the Day of Judgment fall, so that I can meet my son in Heaven. I am in a hurry to meet my son in Heaven.”

The boys’ father, 37-year-old Naseer Ullah, who also has three daughters, rushed to the school as soon as he heard of the attack. “After what seemed like hours of waiting, I saw Tahir and hugged him like a long-lost relative,” he says. But while he continued to wait for Yaseer, his eldest son never came out of the school. “A relative called me in the afternoon and told me to come to the Combined Military Hospital—they claimed he was injured but was otherwise fine. But when I reached the hospital, I saw my son’s body,” he says, tearfully recalling that he pleaded with his son to come back to him. “I hugged his body and asked him not to leave us. Please don’t leave us,” he said.

The grief-stricken father says he has high expectations of Army chief Gen. Raheel Sharif, who welcomed students back to the APS on Jan. 12. “The establishment of military courts [and end to moratorium on death penalty] is a good thing,” he said. “Gen. Sharif is a nice and kind-hearted man. We trust him and are sure he will eliminate terrorism from the country.”

Tahir says his parents have argued over allowing him to return to school. His mother didn’t want him to go back, but his father wants him to complete his education. “It is hard for us to see our children returning to school after our eldest son never returned [on Dec.16],” they told Newsweek. The pressure might seem daunting, but the 13-year-old says he can handle it.

“We have wasted enough time crying. Nobody ever came back because of wailing or crying. We have to move forward,” he said. “I want to join the Pakistan Army and crush these militants and take revenge for all the innocent people brutally massacred by them,” he added. “There is double responsibility on my shoulders. I have to complete the mission for my brother and cousin.”

May Allah Protect our innocent children from further harm and evil and Grant these brave kids a high reward. May Allah also give peace and SABR to those who lost their children, siblings and relatives. AAMEEN.