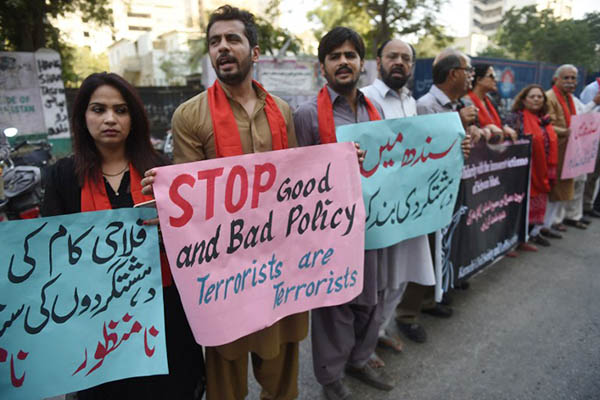 When Europe was passing through its Dark Ages (500-1000 A.D.), religious authorities banned inquiry and punished any new knowledge generated through these inquiries. The human condition is predicated on uncertainty and doubt is the natural outcome of this condition. Stricken with doubt, the human mind asks questions and is rewarded with contingent—but not permanent—knowledge. Religion is the word of reassurance in an uncertain world, but human authority confuses this with certainty and punishes those who ask questions.

Pakistan’s ideology, based on religion, punishes doubt and inquiry. Certitude breeds intolerance of the variant point of view, and human authority seeks to punish those who cultivate doubt and ask questions to increase human knowledge. Ideological states in modern times have punished dissent based on doubt and inquiry. Pakistan as an ideological state uses its law against blasphemy. It accepts “freedom of speech” or “expression” with the “exceptional” Article 19 of the Constitution, which says:

“Freedom of speech, etc. -Every citizen shall have the right to freedom of speech and expression, and there shall be freedom of the press, subject to any reasonable restrictions imposed by law in the interest of the glory of Islam or the integrity, security or defense of Pakistan or any part thereof, friendly relations with foreign States, public order, decency or morality, or in relation to contempt of court, [commission of] or incitement to an offence.”

If one looks carefully at the “exceptions” from freedom of speech indicated in the Article, a vast area of inquiry has been excluded and made subject to state inquisition. In the case of “friendly relations with foreign States,” the Article has not been modified over time to prevent it from becoming outmoded. This leads Pakistanis to accuse one another of crimes of illegal expression as well as giving an oppressive government the handle to round up its adversaries and keep them in jail on false charges. Above all, it closes the doors of knowledge.