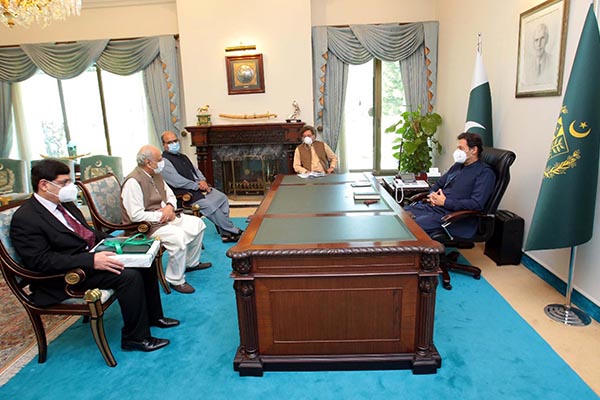 A performance report submitted by the Interior Ministry to Prime Minister Imran Khan on Wednesday claimed that in the 20 months since the incumbent government came to power, it had proscribed two organizations and 11 of their affiliated groups.

Presented by Interior Minister Ijaz Shah and Adviser to the P.M. on Accountability Shahzad Akbar, the report claims it has also frozen 976 movable and immovable properties of proscribed outfits. It also claimed to have taken control of schools, colleges, hospitals, dispensaries, ambulances belonging to the proscribed organizations, but did not clarify how many assets this entailed.

According to the report, more than 200 individuals and supporters of proscribed organizations have been taken into police custody, and funds of Rs. 2,400 million have been recovered to manage the facilities taken over by the government.

Shah told the prime minister that since coming into power, the incumbent government had met almost all the conditions of the Financial Action Task Force to combat money laundering and terror financing. The FATF formally placed Pakistan in its grey list in June 2018 and the country has been struggling since then to obtain a white-listing and avoid the sanctions imposed by a blacklist designation.

The prime minister was informed that the government had revived the National Action Plan against terrorism, establishing 14 high-level committees of experts to submit proposals on various issues—which were set to deliver within a month.

The ministry also claimed to have significantly improved internal security, pointing to visits by international dignitaries such as Prince William and Princess Catherine of the U.K., and Saudi Crown Prince Mohammed bin Salman, as evidence of this.

The report also highlighted the ministry’s efforts to make the country safer for tourism in line with the prime minister’s vision, claiming online and electronic visas were being issued to citizens of 175 countries to boost foreign investment in the country.

The report states that there was a 15.37 percent decrease in criminal activities in the federal capital in the past year, claiming “Islamabad has been declared the safest city of Pakistan.”

It also claims that the ministry has been effectively performing its frontline role in the battle against the novel coronavirus, adding that it is an active participant in daily meetings on the pandemic at the National Command and Operation Center.