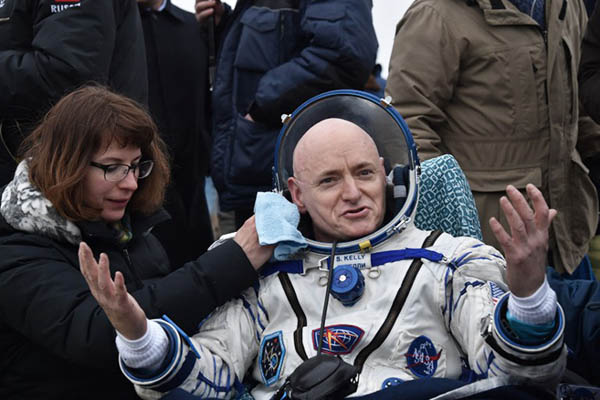 Scott Kelly now holds the record for the longest single stay in space by a U.S. astronaut.

U.S. astronaut Scott Kelly and Russian cosmonaut Mikhail Kornienko returned to Earth on Wednesday after spending almost a year in space in a ground breaking experiment foreshadowing a potential manned mission to Mars.

“We have landing,” Russian Mission Control confirmed after the trio touched down southeast of the settlement of Dzhezkazgan in central Kazakhstan at 0427 GMT.

Kelly and Kornienko, who both spent 340 days in space, returned with Russia’s Sergei Volkov, who was stationed at the ISS for over five months. The “one-year crew” mission saw Kelly break the record for the longest single stay in space by a U.S. astronaut, while Kornienko is now fifth on the list for lengthiest mission by a Russian cosmonaut.

The pair’s near year-long stay in space—which started on March 27 last year—was the longest by any astronauts aboard the ISS and seen as a vital chance to measure the effects of a prolonged period in space on the human body. Kelly was also part of an experiment comparing his development and changes in space with his identical twin brother—Mark—back on Earth.

“Spaceflight is the biggest team sport there is, and it’s incredibly important that we all work together to make what is seemingly impossible possible,” Kelly said when handing over command of the ISS to fellow NASA astronaut Tim Kopra on Monday.

In his year aboard the space station Kelly has been an avid Internet poster, capturing stunning views on his Instagram page and tweeting regularly to nearly a million followers while travelling some 143 million miles. In one particularly eye-catching stunt the bald-headed astronaut posted a short video of himself dressed up in a gorilla suit and floating through the ISS in pursuit of a colleague.

“Needed a little humor to lighten up a year in space,” he wrote on Twitter on Feb. 23, when he posted the video. “Go big, or go home. I think I’ll do both.”