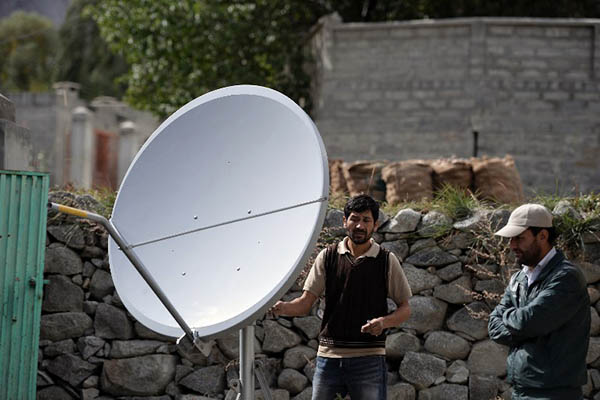 When a landslide created a huge, turquoise lake that cut them off the world, the farmers of Gulmit were left destitute and unable to sell their potatoes. Their solution: to drag their Himalayan valley in Pakistan’s far north into the Internet age.

In the village, which is nestled between two peaks approaching 8,000 meters high, farmers scrabble to grow the produce as their ancestors did. But just a few meters away Karim Aslam is hammering at a keyboard on a computer connected to a giant satellite dish. He downloads audio files sent from the U.S.: English-language recordings of patients’ diagnoses sent from Tennessee, which he transcribes before sending back, acting as a long-distance secretary.

It was a step change for Gulmit, an idyllic village of some 3,000 people with stone walls and potato crops that stretch out over the majestic fields of northern Pakistan, near the China border. “Potatoes are seasonal. You cannot live with that the whole year, but I can live [on] my transcription job,” explains Karim, who took English classes at school and found the work over the Internet by contacting a Karachi-based company that deals with U.S. clients. He soon found his stride with the recordings. At first, he managed around 30 minutes per day, but now, he says “I am doing at least 120 to 150 minutes per day.”

The transcripts earn him around $400 per month, a small fortune compared to the meager wages farmers make.

Since the late 1990s, South Asia, with its large numbers of youths educated in English, has been home to an outsourcing boom, particularly in customer call centers. But until a spectacular landslide in 2010, this village perched 2,400 meters above sea level had remained untouched by modernity.

Hemmed in by the landslide, water from the river Hunza began to rise creating the artificial Attabad lake, cutting off Gulmit from the rest of the villages of the north. The only way to cross was by hiring barges—but the cost of doing so saw the potato industry collapse.

Forced by economic necessity, Gulmit was finally connected to the web, driven by ambitious village youths eager to tap in to the digital economy and the endless possibilities of outsourced work. The only problem was of infrastructure: deprived of the phone network, the village did not have Internet access.

So European donors, via a local NGO called Kado, funded the creation of digital training center with 700 trainees in the surrounding area of Gojal, as well as the purchase of laptops and the installation of a satellite connection. In mid 2012, Gulmit went online. “It was amazing for us,” recalls Anila Hakim, an 18-year-old villager training in IT. “At that time, we were not aware of what the current issues are all about and what is going on inside our country, or outside, so being connected to the whole world was glorious.”

But the Internet gold rush may be ebbing—financing for the Kado project has ended. Karim’s Internet connection is the only one still working in the village. But his satellite subscription costs a small fortune: between $150-200 a month. “It’s far too much,” he says.

If connectivity was less of an issue, “I would have trained lots of guys, and we would have done lots of work from the U.S. or Canada,” he says, wearing a fake leather jacket to protect him from the autumnal cold as he leans over his keyboard.

There is hope Gulmit will stay in the Internet age—the NGO Kado is looking for new foreign financing to provide new satellite web services, pending the arrival of landline connections, explains Abdul Waheed, the project’s director. The potato farmers, for their part, are smiling again. This year, thanks to Chinese investment, construction on a tunnel bypassing the lake has been completed, re-connecting Gulmit to the rest of the country.

“We were producing potatoes, then we were earning money through the Internet. This was only an alternate option… now we will go back to potatoes,” said Waheed. But he hasn’t lost all hope of utilizing the world wide web.

He adds: “We will market the potatoes through Internet.”