Home Latest News Into the Dark 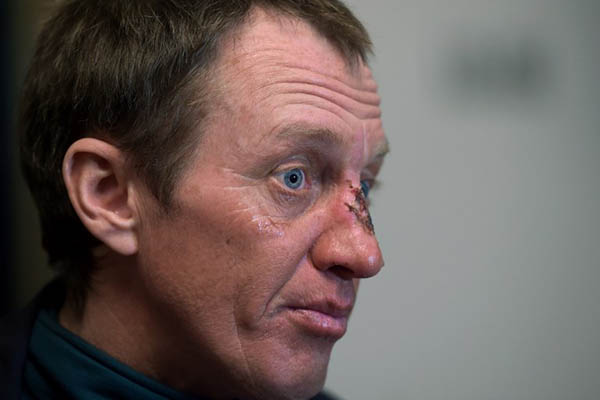 Engulfed in a blizzard at 6,000 meters, Denis Urubko screamed into the vast darkness on Pakistan’s “killer mountain”—then, through the wind came a woman’s faint reply, setting up a daring late-night rescue.

Urubko and climbing partner Adam Bielecki scrambled toward the cry, hoping to encounter stranded French mountaineer Elisabeth Revol and Polish alpinist Tomek Mackiewicz. They would only find one, forcing them to make the type of choice that has haunted past expeditions, fuelling books and films in which climbers and their loved ones struggle to come to terms with the at times fatal consequences of their drive to scale the world’s greatest peaks.

Knowing there was little margin for error, the duo cut through howling winds and heavy snow toward the sound of the beleaguered climbers, who had become stranded during a disastrous descent on Pakistan’s Nanga Parbat.

“I thought ‘yes Adam, we are very close’,” Urubko told AFP in Islamabad in his first comments to media following the rescue in late January, which made global headlines. “I was approaching first and I saw this lady in [the] very weak light of my head lamp.”

In the bid to save their fellow climbers Urubko and Bielecki had dashed to Nanga Parbat from K2, the world’s second highest mountain, briefly abandoning their own historic attempt to become the first to summit it in winter. The pair flew from K2 on a Pakistani military helicopter, arriving on Nanga Parbat in the evening where they began scaling the mountain at an incredible pace.

They covered more than 1,000 meters in about eight hours—at times climbing without ropes, at others using only their ice picks or clinging to the remnants of lines left behind by previous expeditions.

When they reached Revol, she had already spent two nights above 6,000 meters without a tent. She had been forced to separate from Mackiewicz, who was suffering from snow blindness and was coughing up blood, a sign of oedema, or acute mountain sickness.

Exposed to harsh winds and blistering subzero temperatures, Revol began experiencing altitude-induced hallucinations. At one point she removed her shoes for five hours and developed frostbite on her hands and feet. As she staggered toward him, Urubko noticed that Revol was only wearing thin gloves and her hands had started turning white.

In hopes of saving her fingers he gave her his own gloves. The rescuers quickly made camp, forcing the weary Revol to drink water and take medicine. Then, as they waited through the long cold night, they began the terrible debate: whether they should continue searching for Mackiewicz, or get the exhausted and weakened Revol down the mountain.

They did not know where Mackiewicz was, only that he was higher up the mountain, shrouded in blizzard and darkness, already ill when Revol left him. “Elisabeth was trying to help him to get him down but [it] was not possible of course,” explained Urubko.

Revol would not be able to climb down the steep Kinshofer route by herself. But if they went with her, Urubko said, she had a “hundred percent” chance of survival—while there was “no chance” of saving Mackiewicz. As dawn broke the three began their descent, leaving their Polish comrade to his fate.

Revol, who spoke to AFP in February, recalled her parting words to him: “I must go down, they’ll come to get you.” The decision, she said, was “imposed on me,” describing it as “terrible and painful.”

It took them five and a half hours to reach Camp One, from where they were evacuated by helicopter. The sound of its approach, Urubko said, was the moment they knew they had succeeded in saving Revol. She was flown to Pakistan’s capital and later France to be treated for severe frostbite.

Following the rescue attempt, Urubko and his team returned to K2. He made international headlines again in late February with what other climbers described as a “suicidal” attempt to summit K2 alone, after a series of disagreements drove him away from the rest of the Polish expedition.

The mountaineer later abandoned the climb. He told AFP he had made it to Camp Three—but without anyone with him, and with his pictures and footage confiscated by the Polish expedition, it was impossible to verify the claim.

However fellow climbers assessing his bid had said that if anyone could make it, Urubko—one of the few people in the world to summit all 14 eight-thousanders, peaks above 8,000 meters high—could. “He is one of the top five best Himalayan mountaineers in the world,” said Pakistan’s most accomplished climber Nazir Sabir, who has summited both K2 and Everest.

Others, however, describe him as too prone to taking risks. “He is too emotional, not patient,” Elena Laletina, editor of Russianclimb.com told AFP.

Urubko cited his previous climbs on Nanga Parbat—in northern Pakistan, and at 8,125 meters the world’s ninth-highest mountain—as being the reason the rescue had succeeded.

Nanga Parbat earned the nickname “killer mountain” after more than 30 climbers died trying to climb it before the first successful summit in 1953.