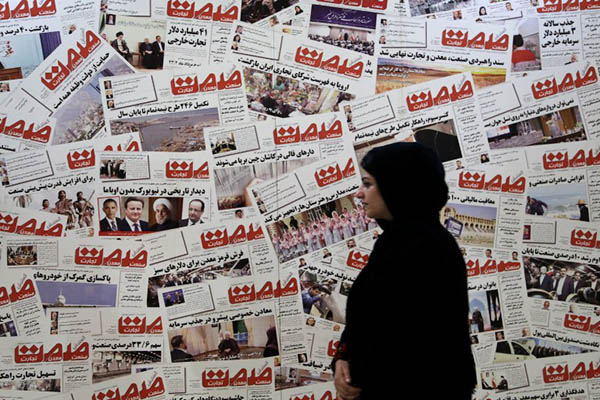 Iran banned a weekly newspaper owned by a critic of its nuclear deal on Monday and issued a formal warning to the country’s leading conservative daily for alleged breaches of reporting guidelines.

The penalties were the first issued by the government since new guidance on media coverage of the historic accord was issued last week, underscoring sensitivity about the nuclear issue in Tehran. The Press Supervisory Board banned 9th Dey Weekly, managed by ultra-conservative lawmaker Hamid Rasaie and named after the Persian calendar date of a major pro-government rally on Dec. 30, 2009. It also gave warning notices to the Kayhan daily and another outlet, the Raja news website.

All are alleged to have insulted Iranian officials as well as violating orders on coverage of the deal issued by the Supreme National Security Council (SNSC).

The SNSC is the country’s highest security committee and it oversees the nuclear talks under the auspices of supreme leader Ayatollah Ali Khamenei.

On July 14, Iran and the United States along with Britain, China, France, Russia and Germany reached an agreement to end the nuclear dispute with Iran. Under the deal Iran has agreed to curbs on some of its nuclear activities in exchange for a lifting of international sanctions imposed in recent years. Conservative media in Iran have poured scorn on the deal.

Iran has always denied Western allegations that it aims to develop an atomic weapon and says its nuclear program is for peaceful energy production.

The official IRNA news agency reported the media ban and warnings. Quoting the Press Supervisory Board it urged domestic media to consider “national interests and security and carry out criticism in the framework of responsible freedom.”

“If anyone was to make comments against our national interests on a subject that is tied with our national security, it should definitely be stopped,” said Hossein Noushabadi, a culture ministry spokesman. The nuclear agreement is “an important matter that was achieved under the supervision of the supreme leader… and cannot be easily criticized with unjust comments,” he added.

Rasaie said he was disappointed by the suspension. “The banning of 9th Dey Weekly under [President Hassan] Rouhani’s government is no strange news,” the lawmaker wrote on his Instagram page.

It is the third time the publication has been banned over its coverage of the nuclear issue. On the two previous occasions—after an interim agreement in November 2013 and then again earlier this year—the ruling was overturned.

“This government has proven much less tolerant of criticism than it claims,” Rasaie said.