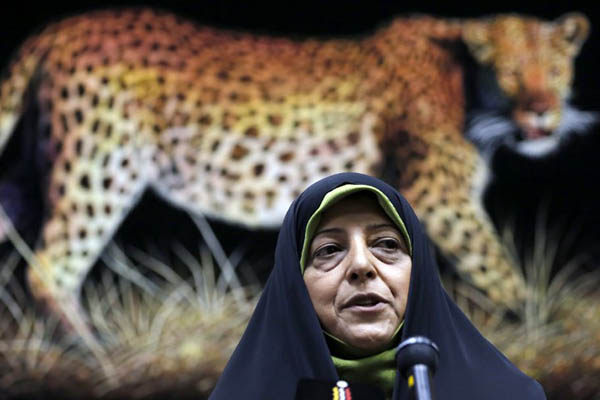 A senior Iranian official said on Friday that Tehran “cannot wait forever” for the confirmation of the 2015 nuclear accord between Iran and world powers that is hanging in the balance after the United States withdrew.

Speaking to AFP in Lithuania’s capital Vilnius, Iran’s vice president for women’s affairs Massoumeh Ebtekar also said that Tehran “will be ready for further uranium enrichments, these are preparations which are underway, all within the framework of JCPOA.”

The future of the deal—known as the Joint Comprehensive Plan of Action (JCPOA)—has been thrown into doubt after President Donald Trump announced last month that the U.S. would withdraw from the accord and re-impose sanctions. The remaining signatories to the pact have been scrambling to find ways to preserve the accord since Trump’s announcement.

Last month a senior Iranian official said European powers had until the end of May to come up with an economic package to compensate Iran for the effects of the U.S. withdrawal.

Ebtekar told AFP that Iran wanted European powers, Russia and China to confirm the deal “as soon as possible because Iran cannot wait forever and it’s part of our national right.”

“We have been a faithful player to this commitment, we’ve done our best, we’ve shown our good intentions. We are facing a very volatile region,” added Ebtekar, who was visiting Vilnius to attend the Women Political Leaders Global Forum.

Ebtekar said that the deal was “important to preserve because it is not only a nuclear but also a non-proliferation deal,” adding that it was “very important” for peace and security “not only for the Middle East but also the broader region and at global level.”

Her comments regarding Iran’s preparations to re-launch uranium enrichment echo ones made on Wednesday by Reza Najafi, Iran’s ambassador to the International Atomic Energy Agency (IAEA), on the sidelines of a meeting of the IAEA’s board in Vienna. Najafi said that Iran was in “preparatory works” to restart nuclear activities in the event of the failure of the accord.

Ebtekar called on the European Union to “take a very strong stance against any unilateral action that could impede peace and security processes, and could undermine the trust that has been created between countries to this pledge.”

Experts from the countries still in the Iran nuclear deal held a scheduled meeting in Tehran on Thursday. The closed-door talks involving representatives from Iran, Britain, China France, Germany and Russia as well as the European Union had long been on the cards, but comes as tensions rose on the heels of Tehran’s announced plan to boost uranium enrichment capacity.