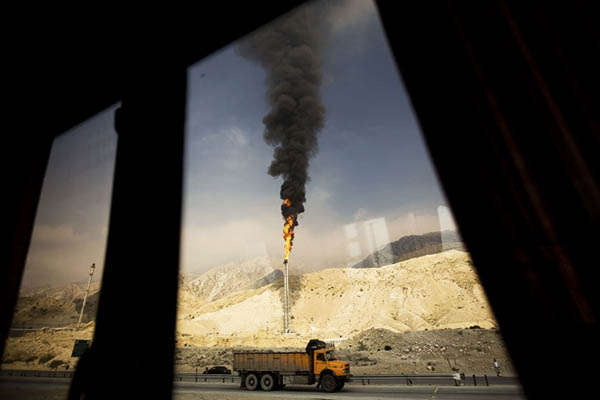 Western sanctions over Iran’s nuclear program cannot prevent it from growing, President Hassan Rouhani said Tuesday as he inaugurated part of the giant South Pars gas field in the Gulf.

“This inauguration means that when we say sanctions cannot stop us from growing, developing and moving forward, Phase 12 bears witness to that,” he said. Tuesday’s ceremony comes with Iran and the major powers engaged in crunch talks in Switzerland as the clock ticks down on reaching an elusive deal on Tehran’s disputed nuclear program. “We stand tall before the world powers and in the course of the talks, sooner or later, we will see results,” Rouhani said.

Iran’s Foreign Minister Mohammad Javad Zarif and U.S. Secretary of State Kohn Kerry met on Tuesday in Lausanne for a second day of negotiations trying to agree the outlines of a deal that would bury any prospect of Iran developing atomic weapons. The South Pars field, which Iran shares with Qatar, remains underexploited because of U.S. and E.U. sanctions imposed in 2012 over the Islamic republic’s uranium enrichment activities.

One of the largest gas reservoirs in the world, the offshore field covers 9,700 square kilometers, 3,700 sq. km of which is in Iranian waters, and is divided into 24 phases. Phase 12, the largest, will produce 75 million cubic meters of gas daily when fully operational, according to officials cited by the media.

“Ultimately, the annual revenue of the phase will be between six and nine billion dollars,” the ISNA news agency cited Deputy Oil Minister Roknoddin Javadi as saying. The oil ministry plans to nearly treble current South Pars output of 300 cubic meters a day—half the production of Qatar—to 800 cubic meters in two years.

Iran, which has the world’s second largest gas reserves, needs to export its output, as oil revenues have faded under the sanctions and because of the fall in crude oil prices.

Rouhani said the South Pars Phase 12 project was completed in 18 months without any foreign help. In 2014, at the Davos Economic Forum, he urged international companies to return to Iran, but oil majors preferred to await the conclusion of a global agreement and the total lifting of the oil embargo.