Iran Cracks Down on Satellite Dishes 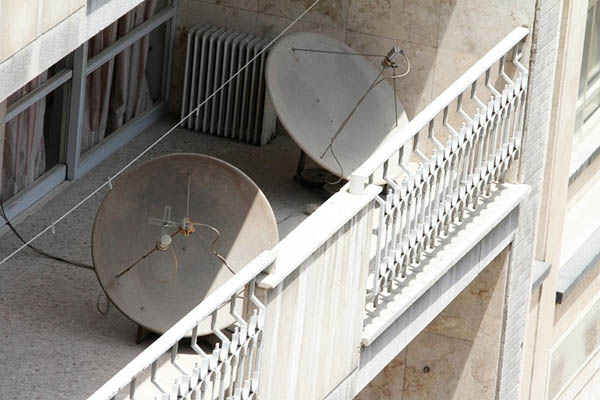 Iran destroyed 100,000 satellite dishes and receivers on Sunday as part of a widespread crackdown against the illegal devices that authorities say are morally damaging, a news website reported.

The destruction ceremony took place in Tehran in the presence of General Mohammad Reza Naghdi, head of Iran’s Basij militia, who warned of the impact that satellite television was having in the conservative country.

“The truth is that most satellite channels… deviate the society’s morality and culture,” he said at the event according to Basij News. “What these televisions really achieve is increased divorce, addiction and insecurity in society.”

Naghdi added that a total of one million Iranians had already voluntarily handed over their satellite apparatuses to authorities.

Under Iranian law, satellite equipment is banned and those who distribute, use, or repair them can be fined up to $2,800. Iranian police regularly raid neighborhoods and confiscate dishes from rooftops.

Culture Minister Ali Jannati pleaded on Friday for a revision of the law. “Reforming this law is very necessary as using satellite is strictly prohibited, but most people use it,” Jannati said. “This means that 70 percent of Iranians violate the law” by owning satellite dishes, he added.

Naghdi criticized Jannati’s comments and said those in charge of cultural affairs “should be truthful with people rather than following what pleases them.”

“Most of these satellite channels not only weaken the foundation of families but also cause disruptions in children’s education and children who are under the influence of satellite have improper behavior,” Naghdi said.

There are dozens of foreign-based Farsi satellite channels broadcasting mostly news, entertainment, films and series. Conservatives regularly denounce the channels as an attempt to corrupt Iranian culture and Islamic values.

Moderate President Hassan Rouhani, whose four-year mandate ends in June 2017, has repeatedly said that the ban on satellite dishes is unnecessary and counterproductive.