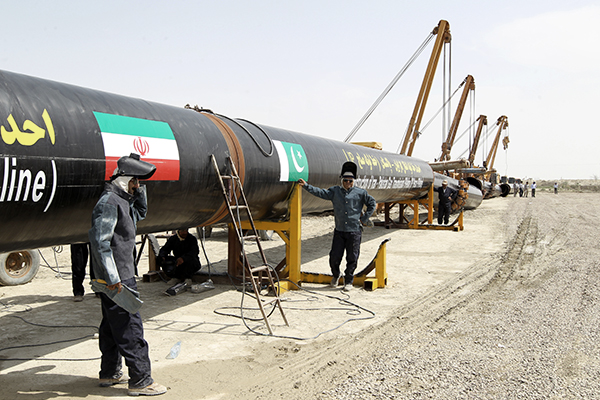 A landmark deal on Iran’s nuclear program has breathed new life into plans for a gas pipeline through Pakistan and sparked a geopolitical tussle, with Russia looking to expand its influence, observers say.

With sanctions on Iran likely to ease and peace talks between the Taliban and Afghan government getting under way, wrangling is intensifying over the proposed pipelines, which would link Central Asia to the Middle East. Islamabad last week hailed the nuclear deal, struck after long negotiations in Vienna, as reviving a stalled project to pipe gas from Iran’s southern fields to energy-starved Pakistan.

The South Asian state is desperate for solutions to a long-running power crisis that has sapped economic growth and left its 200 million inhabitants fuming over incessant electricity cuts. The $7.5-billion Iran-Pakistan (IP) pipeline was inaugurated with great fanfare in March 2013, but the project immediately hit quicksand in the form of international sanctions on Tehran, which meant cash-strapped Pakistan struggled to raise the money to build its side.

Minister of Petroleum and Natural Resources Shahid Khaqan Abbasi said the Vienna deal should allow Islamabad to make good on its agreement to finish the pipeline and buy Iranian gas. “Now hopefully, as the sanctions are removed, it facilitates us to address our energy need and also meet the contractual obligation,” he said.

Tehran has already built its part of the 1,800-kilometer pipeline, which should eventually link its South Pars gasfields to Nawabshah, close to Karachi.

As part of an ambitious $46 billion economic corridor linking western China to the Middle East through Pakistan, Beijing recently started work on the section of the pipeline between Nawabshah and the port of Gwadar, close to the Iranian border. Once this is completed, Pakistan will build the last 80 kilometers to Iran—before the 2018 general elections, the government hopes—and it could in future extend the connection northeast to China, according to government sources.

Russia is interested in supporting the IP pipeline through energy giant Gazprom, according to the Russian embassy in Islamabad. Moscow has historically had closer relations with India, Pakistan’s neighbor and great rival, but is pivoting more to Islamabad as New Delhi and Washington become closer allies.

Yury Barmin, an analyst specializing in Russia’s Middle East policy, said that by using the IP pipeline to get closer to Pakistan, Moscow wanted to show India it had other options in the region. “At the same time Russia really wants to explore commercial opportunities for its defense industry in the wider MENA (Middle East) region, and Pakistan is probably the only remaining untapped market for Moscow in that sense,” Barmin told AFP.

Islamabad and Moscow signed a defense cooperation agreement in November last year. The two countries are also close to finalizing an agreement to build a gas pipeline linking Karachi, which has an LNG terminal, to Lahore, said Mobin Saulat, the CEO of Inter State Gas Systems, the publicly-owned company in charge of gas pipelines in Pakistan.

Saulat told AFP these moves meant that the Turkmenistan-Afghanistan-Pakistan-India pipeline (TAPI), an even more ambitious project, would likely take a back seat for now. “LNG is happening already, we have the supply in place, the happening of IP with the latest development is of course next. And TAPI, in the list, will come at the end,” he said.

TAPI, valued at up to $10 billion, would pump gas from Turkmenistan to Pakistan and India, through Afghanistan. But it is politically complex, requiring cooperation between at least four governments, and logistically challenging, as the pipeline would pass through areas of Afghanistan and Pakistan plagued by Taliban and separatist insurgents.

The Taliban’s summer offensive is in full swing but there is hope for peace after militant and government representatives met for talks in Pakistan a fortnight ago.

Last September France’s Total was working to take the lead on TAPI, but the rise of Russian interest could change the field. “They are talking to three companies, Total is number one and then a Russian and a Chinese company. Total definitely is the most advanced in the talks,” minister Abbasi said, citing briefings from the TAPI steering committee.

Russian participation in TAPI would eventually allow Moscow to connect the pipeline to others in the former Soviet Union, Barmin noted. But there could be more trouble ahead. The CEO of Rostec Sergey Chemezov, considered close to Russian President Vladimir Putin, is himself the subject of U.S. sanctions over the Russian annexation of Crimea.