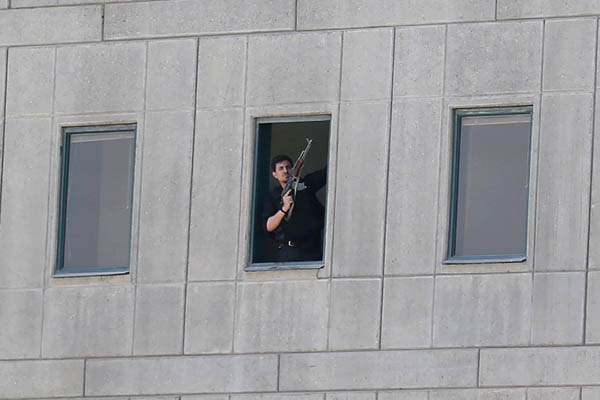 Iran’s elite Revolutionary Guards on Wednesday vowed revenge for twin attacks by the Islamic State group in Tehran, and said Washington and Riyadh were “involved.”

“The Revolutionary Guards have always proven that they will never allow the blood of innocents to be spilt without revenge,” they said in a statement. “This terrorist action, coming one week after the meeting of the president of the United States with the leader of the one of the region’s reactionary governments [Saudi Arabia]… shows they are involved in this savage action.”

Separately, the deputy chief of the Guards’ Intelligence Service, Mohammad Hossein Nejat, told the Fars news agency that the men who attacked the parliament building in Tehran were aged between 20 and 25. “[They] went to the parliament as visitors. The guards became suspicious of their bags and when they wanted to search them, shooting began and they killed the security guard,” he said. “The U.S. and Saudi regime had ordered their stooges to do this.”

He said the men spoke Arabic in the video released by I.S. from inside the building, but that their nationality was not yet known.

Twelve people were killed and more than 40 injured in the attacks on Tehran’s parliament complex and the shrine of revolutionary founder Ayatollah Ruhollah Khomeini.