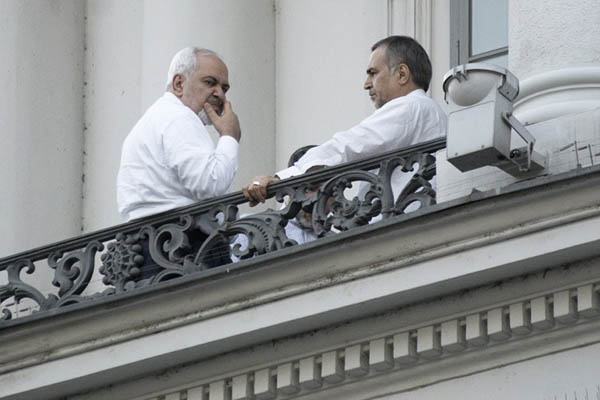 Diplomatic sources hopeful of inking agreement, but warn that it could still fail.

Iran and major powers will seek Monday to clinch a historic nuclear deal, with both sides saying an accord to end the 13-year standoff lies tantalizingly within reach.

The talks, the latest set of which have dragged on for more than two weeks, aim to nail down an agreement curbing Iran’s nuclear activities to make it extremely difficult for Tehran to develop the atomic bomb, an aim the Islamic Republic denies. There had been optimism that a deal would be clinched over the weekend, but finalizing a framework accord struck in April has proved difficult, with talks stumbling on the exact timing of sanctions relief and Iran’s desire to have a U.N. conventional arms embargo lifted.

“We have come a long way. We need to reach a peak and we’re very close,” President Hassan Rouhani said in Iran Sunday, quoted by the ISNA news agency on a 16th day of talks in Vienna. “We are so close that if you look down from below you feel as if we have got there, but when you do get there you know there are still some steps to take.”

A German diplomatic source, however, warned the talks “could yet fail.”

“But we really are nearly there. The decisive moment has arrived. If Tehran is ready to take the final steps then things can go very quickly,” the source said late Sunday.

A senior U.S. State Department official said Sunday that “major issues remain to be resolved” but Secretary of State John Kerry said he was “hopeful”.

Such an accord, if it can be agreed, approved and implemented properly, which is also no small challenge, would draw a line under 13 years of failed diplomacy and threats of military action. In return Iran will be granted staggered relief from painful sanctions, although the six powers—the so-called P5+1 of the United States, Britain, France, Germany, Russia and China—insist on the option of re-imposing the restrictions if Tehran breaches the agreement.

Foreign ministers from all seven countries were expected to be present in Vienna on Monday. “I hope we are finally entering the final phase of these marathon negotiations. I believe it,” French Foreign Minister Laurent Fabius, who cancelled a trip to Africa to stay at the talks, said Sunday.

The current diplomatic effort dates back to Rouhani’s coming to power in 2013. He sought a rapprochement with the West and an end to his country’s diplomatic and economic isolation.

The prospect of a thawing of relations between Iran and the United States unsettles many in the Middle East, however, not least Tehran’s rivals Saudi Arabia and other Gulf monarchies. Israel, widely assumed to have nuclear weapons itself, is also deeply concerned, complaining that the proposed deal will fail to stop its arch foe getting the bomb.

Several deadlines have been missed over the past few weeks of talks, although diplomats insist that the technical aspects of what will be a highly complex agreement are as good as sewn up. On Monday the terms of a 2013 interim deal freezing parts of Iran’s nuclear program in return for minor sanctions relief expire, although this has been extended several times already.

The deal, if it can be sealed, will however prove a “hard sell” in the U.S. Congress, top Republican and Senate Majority Leader Mitch McConnell said in an interview broadcast Sunday. “It appears as if the administration’s approach to this was to reach whatever agreement the Iranians are willing to enter into,” he told Fox News Sunday.

But Kelsey Davenport, Arms Control Association analyst, said she does not expect the Republicans to be able to scupper what would be President Barack Obama’s biggest foreign policy achievement. “If the administration presents a good deal that blocks Iran’s pathways to nuclear weapons and puts in place intrusive monitoring it should garner enough support from Congress to ensure implementation,” Davenport told AFP.