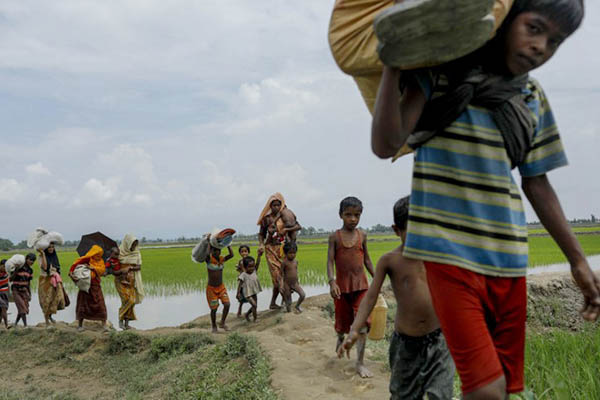 Iran’s Red Crescent said on Thursday it has prepared an aid package for Myanmar’s Rohingya Muslims as they flee a crackdown by security forces, local media reported.

“An emergency, food, life support and hygiene package has been prepared by the Red Crescent to be sent to Myanmar,” said the head of the organization, Morteza Salimi, according to the ISNA news agency. The package would be “immediately sent to the oppressed people of this country if we receive authorization from Myanmar,” he said, adding it had been ordered by President Hassan Rouhani.

It comprised of a planeload of aid weighing 40 tons and worth around four billion rials (just over $100,000), Salimi later told AFP.

Iranian officials have repeatedly condemned the massive security operations by the Myanmar army that followed a series of deadly ambushes by Rohingya militants on Aug. 25.

The United Nations says 164,000 refugees have so far fled to neighboring Bangladesh.

“International community has no excuse to allow the genocide of Rohingya Muslims [to] continue in front of our eyes,” tweeted Foreign Minister Mohammad Javad Zarif later in the day. “We must act now before it’s too late.”

Iran’s ambassador to the U.N., Gholam Ali Khoshrou, also said he was working to bring together ministers and diplomats from several Islamic countries to discuss the issue. “I have had numerous contacts with ambassadors of Islamic countries in recent days and it was decided to form a group at the ambassadorial and ministerial levels,” he said, according to state news agency IRNA.

He said he hoped the group could meet in New York when the U.N. General Assembly convenes next week. “Everyone must make an effort to stop this human catastrophe,” he said.