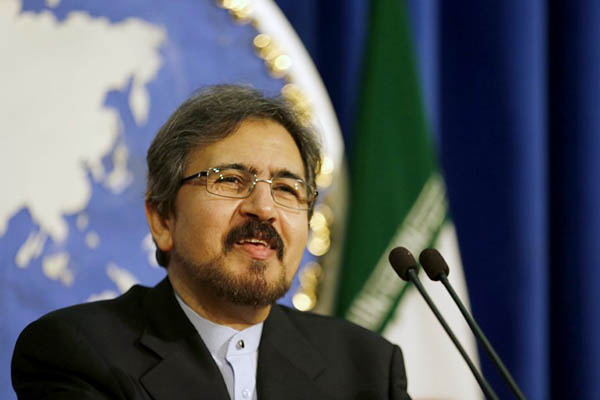 Tehran on Monday rejected as “ridiculous and baseless” accusations by Saudi Arabia that Iran is supporting rebels and blocking peace efforts in Yemen.

“The Saudi foreign minister’s claims that our country has been blocking peace efforts in Yemen are ridiculous and baseless,” foreign ministry spokesman Bahram Ghasemi said. “Iran has condemned the aggression [against Yemen] since the beginning… and will not spare any efforts to stop this bloody and detestable war,” Ghasemi said in a statement published on the ministry’s website.

Saudi Arabia leads a military coalition backing Yemen’s government in its fight against the Shia Houthi rebels. Both sides in the Yemen conflict have come under harsh criticism for their neglect of civilian safety, but the Saudi-led coalition has in particular been accused of bombing schools, markets and hospitals.

“Repeating such false accusations will not reduce the responsibility… of those who have committed heinous crimes, particularly murder, destruction of schools and hospitals and pushing an innocent population to famine,” Ghasemi said.

On Sunday, Saudi Arabia’s top diplomat accused Tehran of smuggling arms to the Houthis, who control northern Yemen, and to their allies. Adel al-Jubeir said the Yemeni “militias would not have continued operations without the support of the greatest sponsor of terrorism in the world—the Iranian regime.”

He accused Iran of “destroying all attempts to find a solution in Yemen, which has led to the failure of all political negotiations between the government and these militias.”

Multiple rounds of U.N.-sponsored talks have failed to broker a political settlement between the Saudi-backed government of Abedrabbo Mansour Hadi and the rebels and their allies. Yemen’s war has claimed more than 8,600 lives since the Saudi-led coalition intervened in 2015 after the rebels overran the capital Sanaa.

A cholera outbreak in the impoverished country has claimed more than 2,100 lives since April, as hospitals struggle to secure supplies amid a blockade on ports and the country’s main international airport.

The United Nations has warned Yemen now stands at the brink of famine.

The U.N. Human Rights Council in September agreed to send a group of experts to investigate alleged violations and abuses in Yemen, overcoming strong resistance by Saudi Arabia’s representative.