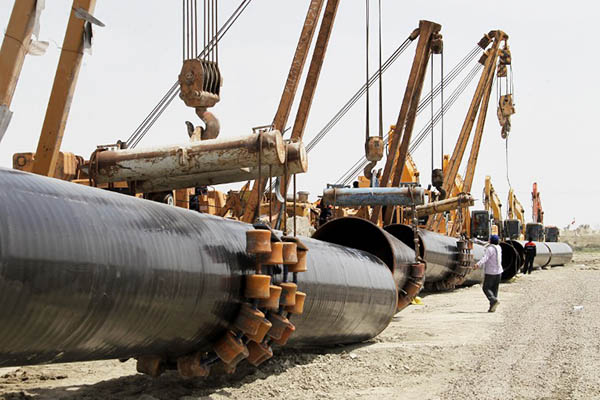 A statement by Tehran’s oil ministry claims Islamabad was fully aware of sanctions when it signed the deal and must now complete it.

Iran’s oil ministry said Wednesday that Pakistan is contractually obliged to complete a major pipeline project that would allow Tehran to export gas to its southeastern neighbor.

The warning came a day after Pakistan’s oil minister, Shahid Khaqan Abbasi, said work on the pipeline was not possible because of sanctions imposed by the United States and the European Union on Tehran over its controversial nuclear drive.

“Iran has carried out its commitments … and expects the Pakistani side to honor its own,” the deputy oil minister, Ali Majedi, said in a statement. “They should even pick up the pace of work and make up for falling behind schedule” in constructing Pakistan’s 780-kilometer side of the pipeline, he added.

Iran, which has the world’s second largest gas reserves, says work on its side in the $7.5-billion project launched in 2010 and is almost finished. But the project’s fate has faced uncertainty, with Pakistan repeatedly running into problems, including major financing issues, while being pressured by the U.S.

On Tuesday, Abbasi said that work on the pipeline “is affected by the sanctions imposed” on Tehran. He did not elaborate on how the sanctions could derail the project. In Tehran, Majedi rejected the argument, saying the issue of sanctions was not a new development.

“Pakistan faced pressure at the time of signing the deal,” he said. “But fully aware of the situation and the issue of sanctions, it still signed the contract.” Majedi added that the option of “bringing in a third party to finish the pipeline” had been raised in recent negotiations with Pakistani officials. He did not elaborate.

Iran’s Oil Minister Bijan Zanganeh said in late October he had “no hope” for the project, after Islamabad asked Tehran for $2 billion in financing to build its side of the pipeline. That request was denied by Iran.