Iran, Turkey Vow to Cooperate on Terrorism and Trade 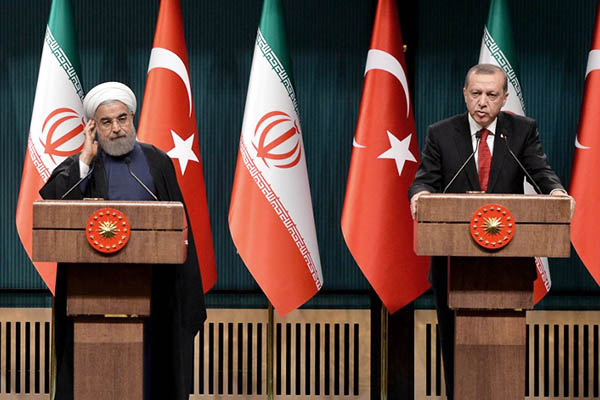 Bilateral agreements will not impact both nation’s opposing views on Syrian civil war.

Iranian President Hassan Rouhani and Turkish counterpart Recep Tayyip Erdogan vowed to boost trade between their two countries at talks on Saturday following the lifting of most international sanctions on Tehran.

They also agreed to cooperate in the fight against terrorism during their meeting at Erdogan’s lavish palace near Ankara, just a day after Iran was accused of supporting extremists at a summit of Muslim heads of state in Istanbul.

Rouhani boycotted the closing meeting of the Organization of Islamic Cooperation in protest at the rebuke. His meeting with Erdogan focused on the Syrian conflict and trade between the two neighbors.

In a joint press conference, Erdogan said he hoped bilateral trade would reach $30 billion annually. It currently stands at just $10 billion after years of sanctions. After being brought in from the cold following last year’s nuclear deal with world powers, Iran is being courted by both Europe and Turkey as a potentially lucrative market for trade and investment.

Rouhani called for banking and energy ties between the two nations to be enhanced as the two leaders inked several cooperation deals.

Energy-hungry Turkey is dependent on Russia and Iran for its oil and natural gas but may turn more to Tehran after Ankara’s relations with Moscow cooled after Turkey shot down a Russian warplane. Despite their rapprochement, Turkey and Iran remain on opposing sides of the five-year civil war in Syria.

Tehran backs Syrian President Bashar al-Assad, while Ankara sees Assad’s ouster as key to any resolution of the conflict and supports rebels fighting to overthrow his regime. Rouhani said stability in Syria, Yemen and Iraq would benefit the Islamic world.

Erdogan said despite their differences on regional issues, Turkey and Iran agreed on the need to stop the bloodshed in the region. The war in Syria has pitted Shia-majority Iran against Turkey’s ally, predominantly Sunni Saudi Arabia, with both aiming to increase their influence in the region.

Iran and Saudi Arabia have been embroiled in a diplomatic crisis since a mob set fire to Riyadh’s missions in Tehran and Mashhad in January in protest at the execution by Saudi Arabia of a prominent Shia cleric.

The Turkish and Iranian leaders also agreed to seek to end sectarian divisions in the Islamic world and join forces to fight terror. “What matters is the unity of the Islamic world. We must tell the world: our identity is Islam, not to be Sunni or Shia, or from another sect,” said Rouhani.