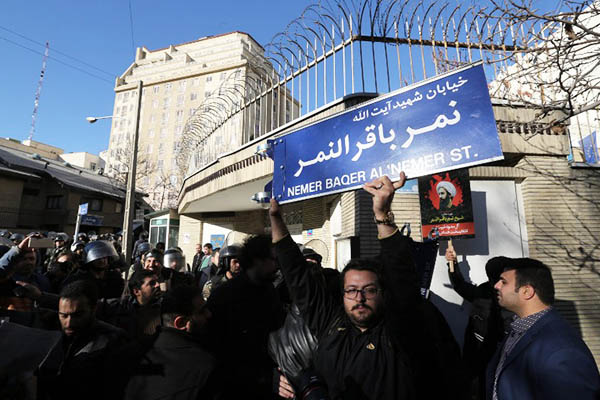 An Iranian protester outside the Saudi embassy in Tehran. Atta Kenare—AFP

Iran’s official broadcaster confirms 54 diplomats and their families have returned to Tehran.

Iranian diplomats have left Saudi Arabia after the kingdom severed all ties with Tehran following attacks on its mission in the Islamic republic, Saudi state media said on Wednesday.

The staff of the Iranian embassy in Riyadh and those of the consulate in Jeddah left “on board a private Iranian plane,” state news agency SPA reported. Iran’s official state broadcaster IRIB said the diplomats have arrived in Tehran, showing pictures of their plane after it landed at Tehran’s Mehrabad Airport. It said the plane carried 54 Iranian diplomats and their families, who were welcomed by one of Iran’s deputy foreign ministers.

Saudi diplomats in Iran returned to the kingdom on Tuesday, Saudi media reported.

Riyadh severed diplomatic ties and air links with Tehran after angry crowds set fire to its embassy in the Iranian capital and its consulate in Mashhad. The weekend protests were in response to Riyadh’s execution of leading Shia cleric Nimr al-Nimr, a driving force behind Shia protests in 2011.

The Iranian ambassador to Saudi Arabia Hossein Sadeghi was quoted on state television as saying that anger at Nimr’s execution was natural but the response was not. “Although protest is a civil right, an assault on an embassy and infringing commitments can damage the image of the Islamic republic,” he said. “This move was unacceptable and wrong and we should learn a lesson so that, while preserving the right to protest, such an act should not happen,” he added.