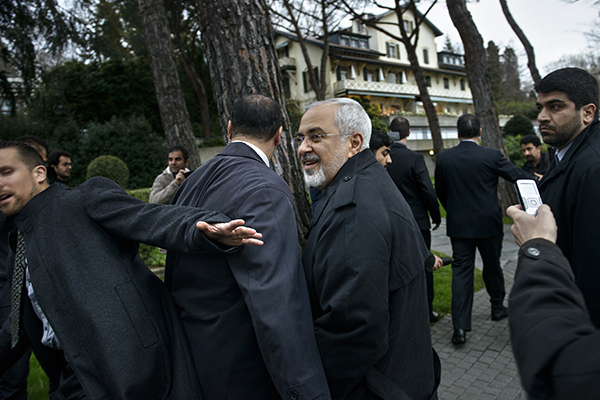 The ball is now in Obama’s court.

Iran and the P5+1 (the U.S., Russia, China, France, and the U.K. with Germany) have reached an agreement on the parameters for a Joint Comprehensive Plan of Action (JCPOA). The ‘breakthrough’ has come after 12 years of negotiations, a period which saw Tehran take a lot of punishment for what the U.S. and its allies described as its efforts to build weapons-grade capability in violation of the nuclear Non-Proliferation Treaty (NPT).

U.S. President Barack Obama called it a major achievement. That sentiment, and the positivity of the agreement on JCPOA, has also been voiced by Iran’s foreign minister, Javad Zarif. The JCPOA terms, according to most reports, “spell out a fair and equitable deal for all parties.” The agreement will allow Iran to pursue and expand its peaceful nuclear program while providing a 15-year window “during which the United States and other members of the P5+1 can build stronger relationships with Iran to reduce Iran’s incentives for nuclear weapons.”

The parties now have until June 30 to sign a deal on the basis of JCPOA. There may still be many a slip between now and then for Obama. The Republicans, Israel and Saudi Arabia remain unconvinced. They would much rather Iran’s nuclear ‘capability’ was taken out through force. Despite the extreme danger of such a course, the fact is that for the opponents of a deal with Iran, the issue is less about Iran’s perceived or real nuclear intentions and more about the fear of Tehran breaking out of its isolation.

This is precisely where Iran has to be commended for its deft diplomacy. Equally, one has to ask why Iran had to take such punishment if it weren’t really planning to go weapons-grade nuclear?

The answer to that question is complex. Take for instance what Sadegh Kharrazi, Iran’s deputy foreign minister, wrote in 2011: “Iran has said time and again that its NPT membership should bring with it all privileges associated with the treaty, including the right to enrichment. If, due to any reason … the West continues to not acknowledge Iran’s rights under the NPT, Iran has no choice but to reconsider its membership in that treaty.”

Iran’s discourse throughout has been that the International Atomic Energy Agency (IAEA) was being used against it for political reasons and that Tehran was being “unjustly denied the benefits of the bargain it made upon accession to the NPT as a nonnuclear-weapon state party in 1970.” Iran also accused the IAEA of “politicized and unlawful investigation and assessment of Iran’s nuclear program, and [engaged] in espionage and sabotage activities inside Iran in collusion with Western powers.” This is only partly true.

In April 1999, during a month-long, coast-to-coast visit of U.S. think tanks, I was invited to speak at the Middle East Institute in Washington, D.C., During the Q&A, a participant asked how I viewed reports about Iran’s nuclear program. I replied that I was not entirely convinced that Tehran was complying fully with its obligations under the NPT. My reasoning was threefold. One, why would Iran, an oil- and gas-rich state be so vociferously pursuing the route of what Tehran calls an energy-related program. Two, why was Tehran prepared to take such economic punishment for a ‘peaceful’ program unless it believed the dividends at the end of the road would recompense the pain. Three, most crucially, why did it have such an ambitious missile program. (It doesn’t make much strategic sense to develop intermediate-range ballistic missiles for a conventional, tactical strike on a target sitting 1,500 to 2,500 kilometers away.)

Later, more evidence began to emerge that Tehran was desirous of enriching uranium to much higher percentages than is required for nonweaponized uses. Pressure mounted on Iran and by 2003 to 2004, the U.S. National Intelligence Estimate was that Iran had stopped its pursuit of weapons-grade uranium. Mohamed ElBaradei, who headed the IAEA for 11 years, also rejected claims, in 2006 and later 2009, just before stepping down, of Iran being in breach of the NPT.

However, ElBaradei also said, in an interview to The Guardian that “We still live in a world where if you have nuclear weapons you are buying power, you are buying insurance against attack. That is not lost on those who do not have nuclear weapons, particularly in [conflict] regions.” He went on to say that the world was likely to see ‘virtual nuclear weapons states’ “who can produce plutonium or highly enriched uranium and possess the knowhow to make warheads, but who stop just short of assembling a weapon. They would therefore remain technically compliant with the NPT while being within a couple of months of deploying and using a nuclear weapon.” He continued: “This is the phenomenon we see now and what people worry about in Iran. And this phenomenon goes much beyond Iran. Pretty soon … you will have nine weapons-states and probably another 10 or 20 virtual weapons states…When you see a lot of concern about the Middle East, it’s a result of people feeling totally repressed by their own government and feeling unjustly treated by the outside world. This combination makes it a ticking bomb.”

ElBaradei went on to write The Age of Deception: Nuclear Diplomacy in Treacherous Times, which is a fascinating read not only because it gives the reader an inside view of the Byzantine maze of nuclear diplomacy and the interests of the states, but also the somewhat bleak future of the NPT. The five recognized nuclear weapons states, while insisting on compliance to Articles IV and V by the nonnuclear weapons states, remain in violation of Article VI of the treaty that called upon them “to pursue negotiations in good faith on effective measures relating to cessation of the nuclear arms race at an early date and to nuclear disarmament, and on a treaty on general and complete disarmament under strict and effective international control.”

That did not, and has not, happened and the 1995 quinquennial review conference (RevCon) extended the NPT indefinitely. In fact, it was that decision in conjunction with the rolling draft of the Comprehensive Test Ban Treaty, as also the coming to power in India of a rightwing Bharatiya Janata Party government that made New Delhi assess that the window for it to conduct a test was fast closing. India’s tests in May 1998 followed by Pakistan’s created two more overt nuclear weapons states.

Be that as it may, Iran’s acceptance of the JCPOA is a master stroke whose timing could not have been better for Tehran. Let it be said, however, that the space for Zarif to achieve this has been created by the changed internal dynamics between the country’s supreme leader and the president, a duality that has, in the past, seen much friction. Zarif’s job to sell the JCPOA will still not be easy but it is less difficult than it would have been if Ali Khamanei weren’t backing President Rouhani. It also helps, not just Zarif but Obama too, that the Iranian public has clearly spoken in favor of the agreement.

The clincher yet will be realpolitik. Iran is currently pursuing a clear and well-coordinated policy to project power in the Middle East, the primary objective of which is to encircle and reduce the influence of the House of Saud as well as fill the power vacuum created by upheavals in various states. It has, over the years, spread influence in region’s state through its proxies. This policy requires Iran to get out of its isolation.

Seen from this perspective, Saudi and Israeli opposition to the deal makes eminent sense from their perspective. Not only has Iran, going by ElBaradei’s statement about ‘virtual nuclear weapons states,’ possibly acquired the knowhow to build a bomb if and when it wants to, it has created space for itself to snap out of its isolation and align its interests with world powers when it comes to fighting and destroying Salafi-Sunni nonstate actors.

There will remain many areas of divergence—Syria’s Assad being one such—but if this deal goes through, Iran will have much greater say in matters Middle East, having ‘proven’ its credentials as a state that negotiated in good faith. In fact, if anything, the ball is now in Obama’s court. If he lets it drop, Iran will be free to pursue its ambitions without the stigma of being called a state that desires to remain outside of international law obligations.

Speaking of which, while it was politically costly for Iran previously to invoke Article X(1) of the NPT and withdraw from the treaty, in the event of this deal falling through because of Washington, and the U.S. and its allies going back to badgering Iran on the nuclear issue, Tehran might well invoke Article X(1) to “deprive Western governments politically antithetical to Iran, of the language and power of legal discourse when making their case.”

Haider is editor of national-security affairs at Capital TV. He was a Ford Scholar at the Program in Arms Control, Disarmament and International Security at the University of Illinois at Urbana-Champaign and a Visiting Fellow at the Foreign Policy Studies at the Brookings Institution, Washington, D.C. He tweets @ejazhaider

Mind you Iran has the world’s oldest undisturbed foreign ministry with archives to prove it. They have fine-tuned the art of brinkmanship while holding on commendable principles. They are truely wise.

This deal is a master stroke by Iran. Hope Pakwill show similar wisdom in dealing with the Yemen problem.