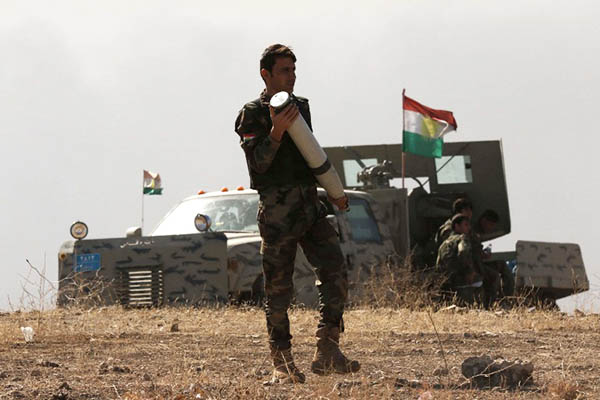 Iraqi forces launched an offensive on Monday to retake Mosul and deal a deathblow to the Islamic State group’s “caliphate” in the city where it was declared two years ago.

Some 30,000 federal forces are leading the offensive, backed by a 60-nation U.S.-led coalition, in what is expected to be a long and difficult assault on I.S.’s last major Iraqi stronghold. Iraqi forces could be seen readying weapons and ammunitions as columns of armored vehicles headed toward Mosul from the town of Al-Shura, some 45 kilometers south of the city, an AFP photographer said.

The Pentagon described the long-awaited operation as a “decisive moment” in the fight against I.S. but the U.S.-led coalition’s top commander warned it could last weeks or more.

The beginning of the assault also saw aid groups voice fears for the hundreds of thousands of civilians remaining in the city, with I.S. expected to use them as human shields.

Iraqi Prime Minister Haider al-Abadi announced the start of the assault in a televised address in the early hours of Monday. “Today I declare the start of these victorious operations to free you from the violence and terrorism of Daesh,” Abadi said.

I.S. seized control of large parts of Iraq and neighboring Syria in mid-2014, declaring a cross-border “caliphate” and committing widespread atrocities. But the jihadists have suffered a string of territorial defeats this year in both countries, and the retaking of Mosul would all but end the group’s presence in Iraq as a land-holding force.

Iraqi forces have been closing in on Mosul in recent weeks but the battle launched on Monday could be the toughest yet in the fight against I.S. The jihadists are vastly outnumbered, with an estimated 3,000 to 4,500 thought to be in the city and surrounding area. But they have had months to prepare and will seek to use hit-and-run tactics, ambushes, snipers, bombs, berms and trenches to slow down and bleed Iraqi forces.

As the assault began, federal forces moved from their main staging base of Qayyarah, south of Mosul, while peshmerga forces from the autonomous Kurdish region simultaneously advanced from the east. Around 4,000 Kurdish peshmerga took part in a push to reclaim villages once inhabited by members of the Christian and Kakai minorities, a statement said.

Abadi stressed that only Iraqi police and army would enter the city proper. “The force leading liberation operations is the brave Iraqi army with the national police and they are the ones that will enter Mosul, not others,” he said.

Resentment among Mosul’s Sunni majority against Shia-dominated security forces was one of the reasons I.S. faced so little resistance when it swept into the city. Tehran-backed Shia militia groups have been accused of serious abuses against Sunni civilians during operations to retake areas from the I.S. group.

Baghdad is also keen to check the influence of the Kurds, who expanded the size of their region by around 40 percent on the back of the vacuum caused by I.S.

The United Nations and other aid organizations warned that a huge number of civilians were in immediate danger as the operation got under way. “I am extremely concerned for the safety of up to 1.5 million people,” U.N. deputy Secretary General for Humanitarian Affairs and Emergency Relief Stephen O’Brien said. “Depending on the intensity and scope of the fighting, as many as one million people may be forced to flee their homes in a worst-case scenario,” O’Brien said in a statement.

Save The Children said “the lives of more than half a million children now hang in the balance.”

The Norwegian Refugee Council said safe exits from Mosul must be provided or civilians “will be faced with the bleakest of choices: stay behind and risk their lives under attack, or risk their lives trying to flee.”

Iraqi forces advancing on multiple fronts are some distance from Mosul and are expected to eventually take up positions on the edge of the city and lay siege to it before breaching its boundaries and directly engaging die-hard jihadists. “This operation to regain control of Iraq’s second-largest city will likely continue for weeks, possibly longer,” warned Lieutenant General Stephen Townsend, commander of the U.S.-led coalition battling the jihadist group. “This is a decisive moment in the campaign to deliver ISIL a lasting defeat,” U.S. Secretary of Defense Ash Carter said.

I.S. once controlled more than a third of Iraq’s territory but its self-proclaimed “state” has been shrinking steadily for more than a year. It lost its emblematic bastion Fallujah in June, the Anbar provincial capital Ramadi months earlier and on Sunday Syrian rebels retook the town of Dabiq, which held special ideological significance for the group.

A clear victory in Mosul would go some way toward restoring the confidence and credibility of the Iraqi security forces, which collapsed when I.S. attacked two years ago, abandoning huge amounts of U.S. military equipment to the group in the process. But even the recapture of Mosul will not mark the end of the war against I.S., which is likely to increasingly turn to insurgent tactics such as bombings as it loses more ground.

I.S. has claimed a string of bomb attacks in Baghdad in recent days, marring the holy Muslim month of Muharram. The jihadists’ defeat in Mosul appears to be only a matter of time and some military sources suggest an exit route for fleeing jihadists could be left open in a bid to minimize the fighting and its potential impact on the city’s population and infrastructure.

The battleground is vast and the area’s ethnic and religious diversity makes it politically complex. I.S. has attempted to erase the ancient city’s history, forcing Christians and other minorities to flee and destroying priceless heritage.