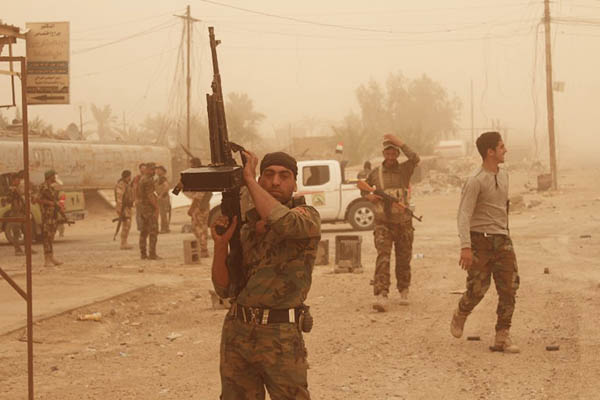 Iraqi forces raised the national flag over the government compound in Fallujah on Friday, top commanders said, a breakthrough in the nearly four-week-old offensive against the Islamic State group’s bastion.

Prime Minister Haider al-Abadi went on state television to announce that his forces were in control of the city except for a few small pockets of jihadists. They met limited resistance from I.S. fighters, who were fleeing the city, the commanders told AFP, leaving the organization on the brink of losing one of the most emblematic strongholds in its two-year-old “caliphate.”

It is the latest setback for the jihadists who have also lost territory in neighboring Syria and in Libya in recent weeks. “We promised you the liberation of Fallujah and we retook it. Our security forces control the city except for small pockets that need to be cleared within the coming hours,” Abadi said.

The overall commander of the operation, Lieutenant General Abdulwahab al-Saadi, said that “Iraqi forces have now liberated 70 percent of the city.”

Significant parts of northern Fallujah, where thousands of civilians are believed to remain, have yet to be retaken.

In December 2015, Abadi announced the liberation of Ramadi, the capital of Anbar province where Fallujah lies, but it took several more weeks of fighting to establish full control.

In the deserted, recently liberated neighborhoods of the insurgent bastion known in Iraq as the “City of Mosques,” elite forces were consolidating positions, stocking up on food and weapons. Dozens of bodies of dead I.S. fighters were left to rot under blankets amid the rubble of homes destroyed by airstrikes, rockets or controlled explosions of the hundreds of bombs the jihadists themselves laid across the city.

Fallujah, just 50 kilometers west of Baghdad, is one of I.S.’s key historical bastions and its loss would leave Mosul as the only major Iraqi city under its control. The U.S.-led coalition, which has carried out airstrikes in support of the Fallujah operation, had initially favored focusing efforts on recapturing Mosul.

Abadi, who was facing huge political pressure over the reform of his own government when he declared the launch of the Fallujah operation, vowed Friday that Mosul was the next target.

In the hours before the latest push into the heart of Fallujah, Iraqi forces retook several neighborhoods in quick succession. “This operation was done with little resistance from Daesh,” Saadi said. “They know, by experience, that a small number of I.S. fighters in urban terrain cannot stop an Iraqi security forces ground assault supported by coalition airstrikes,” said Patrick Martin, Iraq analyst at the Institute for the Study of War.

After months of military operations aimed at completely sealing off the city, I.S. had been expected to fight to the death in a protracted suicide holdout, but recent developments suggest the siege was porous. “There is a mass flight of Daesh to the west that explains this lack of resistance. There are only pockets of them left and we are hunting them down,” Saadi said.

Tens of thousands of civilians have been forced from their homes since the operation began last month.

The first to escape I.S. rule were in rural outlying areas, in the early phase of the operation, which saw a myriad different Iraqi forces seal the siege of the city. Residents of the city center had been trapped in dire conditions for days, but recent advances have allowed large numbers to escape.

I.S. “likely quickly discovered that they did not have the forces available to exert social control over the city and prevent civilians from fleeing once the assault into central Fallujah began,” Martin said.

The Norwegian Refugee Council, which runs camps for the displaced near Fallujah, said the sudden influx meant relief was drying up fast. “Thousands of civilians from Fallujah are right now heading toward displacement camps in a dramatic development that is overwhelming emergency aid provision and services,” it said.

With I.S. on the retreat in the city, a window has opened for civilians to leave but the journey remains dangerous, with several cases of fleeing civilians killed or wounded by roadside bombs. There were an estimated 50,000 people in the city when the operation began but it is unclear how many remain.

Civilians have been used as human shields by I.S., and those who managed to flee face the risk of sectarian-motivated abuse by elements of the pro-government forces.