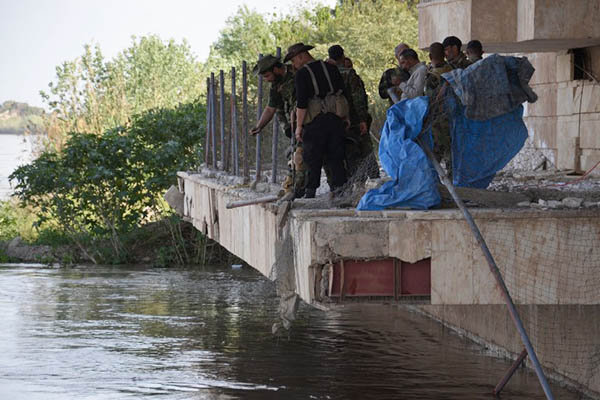 The waterfront is believed to be the site of the Speicher massacre. Younis al-Bayati—AFP

According to one estimate, I.S. militants killed approximately 1,700 army recruits.

Iraqi forces, which retook Tikrit from the Islamic State group, found burial sites Wednesday believed to hold victims of a June massacre in which hundreds of army cadets were executed.

The Speicher massacre—named after the nearby base from which the mostly Shia recruits were abducted—stoked widespread anger against I.S. and helped rally support to battle the jihadists.

Interior Minister Mohammed al-Ghaban told AFP that a burial site had been discovered in a freshly retaken palace complex on the banks of the Tigris river. He was speaking at a concrete waterfront post of Tikrit’s water police building, where the wall was stained by blood that had run down into the river.

“This place reminds us of those who were unjustly killed, it reminds us of the massacre,” Ghaban said, sobbing. “They were innocent people. Today the cowards were defeated… We will hunt them down wherever they are. We will bring security and peace to all of Iraq.”

The site is known among fighters as “Al-Madhbah,” an Arabic word for a place where slaughter is carried out. Pictures of the executions released by the I.S. group showed the police building and several recruits in plainclothes being frog-marched to the waterfront, shot and pushed into the river.

Ghaban said a burial site was found a few meters away in the riverside complex of palaces that former president Saddam Hussein had built in his hometown. “We found dozens of ID cards in a pile of waste near the site,” said policeman Hussein al-Rikabi, who took AFP to the site. He said the documents matched the names of Speicher recruits known to have been executed or who had gone missing since jihadists took over Tikrit and large parts of Iraq in June 2014.

Traces in the ground suggested that earthmoving machinery had been used to bury something. “We don’t know how many bodies are in this mass grave, we are waiting for a special committee to come and carry out the work,” he said.

A statement later announced the committee had been formed in coordination with the health ministry. The highest estimate for the number of young recruits killed in the Speicher massacre is about 1,700.

Hadi al-Ameri, the head of the Shia Badr group of which Ghaban is also a member, had warned at its launch a month ago that the Tikrit operation would be an opportunity to avenge the massacre. His comment had sparked fears that regular and irregular forces would engage in reprisal killings against Sunnis.

Iraq’s political and Shia religious leadership has insisted heavily however on the need for all forces to refrain from any abuses, which they said would only undermine the war against I.S.

The families of the Speicher victims have been anxiously waiting for the Tikrit operation to wrap up and allow for an investigation.