Iraq Must Not be Dragged Into Another Regional War 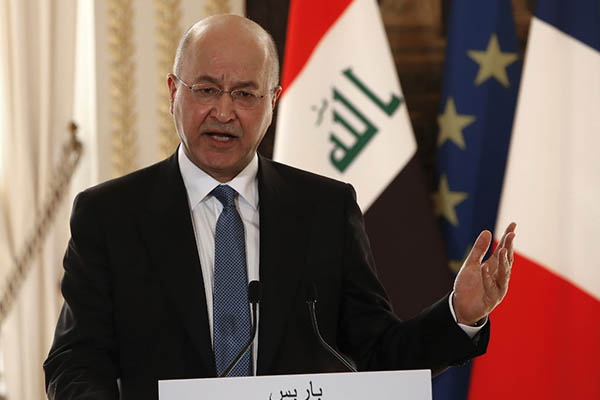 President Saleh says Baghdad does not want to be a victim of conflict in the Middle East amid rising U.S.-Iran tensions

Iraqi President Barham Saleh said on Wednesday his country must not be dragged into another conflict in the Middle East, as tensions rise over its neighbor Iran.

“We have had four decades of challenge and turmoil. We do not want to be embroiled in another war,” he said at Chatham House, the Royal Institute of International Affairs think-tank in London. “We cannot afford our country to be dragged into conflict.”

With tensions high between Iran and the United States, Saleh insisted his country would not become “a staging post for belligerents.”

“We are asking everybody to cool it down… enough is enough,” he said. “We do not want to be a victim of a conflict in Middle East. We have not finished the last one,” the Iraqi president added, referring to the U.S.-led war on terror and battle against the Islamic State jihadist group.

“It is in our national interests to have good relationship with Iran,” he said, whilst adding: “The U.S. is a very important partner for Iraq.”

“We need to transform Iraq from a zone of regional and proxy conflict into a zone of trade, infrastructure development, and jobs and a future for young people,” the 58-year-old said.