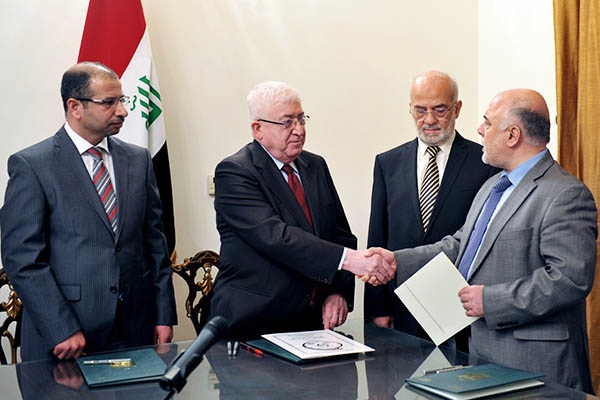 Nuri al-Maliki claims nomination is a violation of the constitution and accuses U.S. of undermining him.

Iraq moved closer to ending Nuri al-Maliki’s stubborn grip on power when his own political clan spurned him for another prime minister to save the country from breakup.

The much-awaited breakthrough in Baghdad came as Kurdish troops backed by U.S. warplanes battled to turn the tide on two months of jihadist expansion in the north. “The country is in your hands,” President Fuad Masum told Haidar al-Abadi on Monday after accepting his nomination by parliament’s Shia bloc, in a move immediately welcomed by the United States. Abadi, long considered a close Maliki ally, has 30 days to form a government, amid hopes that a broad-based cabinet could serve as a foundation for healing Iraq’s deep sectarian divides.

U.S. President Barack Obama welcomed Abadi’s nomination, and Washington as a whole made no secret of its desire to see Maliki step aside and usher in a new era. Maliki, however, appeared determined to resist replacement. Surrounded by 30-odd loyalists from his Shia bloc, he gave a speech denouncing Abadi’s nomination as a violation of the constitution. Maliki, who worked hand in glove with the U.S. when it occupied Iraq, accused Washington of now working to undermine him.

But, even if he could still complicate the handover of power, he looked more isolated than ever, despite deploying special forces and armored vehicles across strategic locations in Baghdad.

The U.N.’s top envoy in Iraq called on the security forces to “refrain from actions that may be seen as interference in matters related to the democratic transfer of political authority.” Washington warned its erstwhile ally “not to stir those waters” and promptly welcomed Abadi’s nomination as a “key milestone.”

“The only lasting solution is for Iraqis to come together and form an inclusive government,” Obama told the press during his vacation in Martha’s Vineyard, Massachusetts. “This new leadership has a difficult task to regain the confidence of its citizens by governing inclusively and taking steps to demonstrate its resolve.”

Obama said he had called “prime minister-designate” Abadi to offer support, and called his nomination “a promising step.” He did not mention Maliki by name in his brief remarks. Obama stressed once again that there was “no military solution” to the crisis in Iraq, but even as he spoke U.S. jets were returning from conducting four separate airstrikes around Mount Sinjar.

Thousands of refugees from the Yazidi religious minority are trapped on the mountain, surrounded by Sunni extremists from the Islamic State, which controls much of northern Iraq and eastern Syria. The jihadist group launched an offensive on June 9, swiftly taking over the main northern city of Mosul before sweeping across much of the Sunni heartland.

Kurdish peshmerga initially fared better than federal troops, but jihadist fighters carried out fresh attacks earlier this month, bringing them within striking distance of autonomous Kurdistan. The threat to Kurdistan, where some U.S. personnel are based, was one of the reasons Obama gave for sending drones and fighter jets, a potential game changer in the two-month-old conflict.

Obama’s other justification was what he said was the risk of an impending genocide against the Yazidis. U.S. intervention appeared to make some impact on both fronts, with the Kurds reclaiming two towns on Thursday and more than 20,000 stranded Yazidis escaping their mountain death trap. Their flight led to biblical scenes of traumatized civilians flocking back to Kurdistan after surviving with little food and water on Mount Sinjar, which legend holds as the final resting place of Noah’s Ark. Several thousand were still thought to be hiding on the mountain, however, as the area remained far from safe on Monday.

Stretched thin along a 1,000-kilometer front, the peshmerga were defeated in Jalawla, a long way southeast from the U.S. bombing’s targets, in a two-day battle that left 10 dead in their ranks. The Pentagon said it had “no plans to expand the current air campaign.”

EU ambassadors from the bloc’s 28 members were to meet in Brussels on Tuesday to discuss potential military and humanitarian aid to Iraq’s Kurds. While Maliki’s Shia militias and Iraq’s armed forces have tried to battle IS fighters, the outgoing premier is seen by many as partly to blame for the crisis for having alienated the Sunni minority.

In the streets of Arbil, a Kurdish city with little love for Baghdad politicians, news that Maliki was being sidelined was welcomed. “IS came here using their enmity with Maliki as an excuse. We hope that now that Maliki is gone, the IS will become weaker,” local writer Mohammad Wany said.

Further south, people in a Sunni Arab neighborhood of the city of Baquba gathered in the street and fired shots in the air to celebrate Maliki’s political defeat.

Abadi, a Shia politician considered close to Maliki, was born in Baghdad in 1952 and returned from British exile in 2003 when U.S.-led forces toppled Saddam Hussein. “Up until recently, he’s been a Maliki surrogate. I have never seen much daylight between the two of them,” said Kirk Sowell, the Amman-based publisher of the Inside Iraqi Politics newsletter.