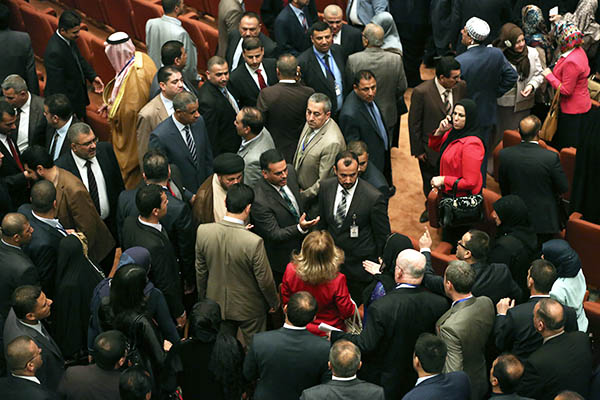 Members of the Iraqi parliament argue at the first session. Ahmad al-Rubaye—AFP

First session of parliament after establishment of Islamic State boycotted by Sunni, Kurdish leaders, resulting in lack of quorum.

Iraq’s leadership was under increased pressure on Wednesday to form a new government to deal with a militant onslaught that has threatened to tear the country apart, after parliament’s first session ended in disarray.

Following a break called to calm soaring tempers, so many Sunni and Kurdish deputies stayed away from the session on Tuesday that quorum was lost and a speaker could not be elected.

Prime Minister Nuri al-Maliki’s bid for a third term has been battered by the jihadist-led offensive that has seized large chunks of five provinces, adding fuel to dissatisfaction over persistent allegations of sectarianism and monopolizing power. The crisis has alarmed world leaders, displaced hundreds of thousands of people and polarized Iraq’s Shia, Sunni and Kurdish populations. That disunity quickly manifested itself in what was the opening session of a parliament elected in April.

Kurdish lawmaker Najiba Najib interrupted efforts to select a new speaker, calling on the government to “end the blockade” and send withheld budget funds to Iraq’s autonomous Kurdish region. Kadhim al-Sayadi, an M.P. in Shia premier Maliki’s bloc, responded by threatening to “crush the heads” of the country’s autonomous Kurds, whose regional leader Massud Barzani told the BBC they would hold a referendum on independence within months.

Some Sunni M.P.s walked out at the mention of the Islamic State (IS), the jihadist group leading the anti-government offensive, and enough Sunnis and Kurds did not return following the break that the session was without a quorum.

Presiding M.P. Mahdi Hafez said the legislature would reconvene on July 8 if leaders were able to agree on senior posts. However, the riotous atmosphere did not stop new M.P.s from queuing to register for their substantial pay and benefits, including weapons and guards, perks that anger ordinary Iraqis struggling with a flagging economy.

Under a de facto agreement, the prime minister is chosen from among Shia Arabs, the speaker from Sunni Arabs and the president from Kurds. The three are typically chosen in tandem.

Washington quickly warned that “time is not on Iraq’s side,” with State Department spokeswoman Marie Harf calling for “extreme urgency.”

Also Tuesday, the Pentagon said that the nearly 500 U.S. troops sent to Baghdad to bolster security are equipped with Apache attack helicopters and small unarmed surveillance drones. The U.S. security contingent will concentrate on safeguarding access to the Baghdad airport as well as the embassy, according to a senior defense official, who requested anonymity.

It looks increasingly as if Maliki is on the way out, despite his bloc having won by far the most seats in April. He faces criticism from all three of Iraq’s major religious and ethnic communities over allegations of sectarianism, sidelining partners and a marked deterioration in security that culminated in the June 9 launch of the militant offensive.

“This has become a much more competitive race for the premiership,” said Ayham Kamel of the Eurasia Group consultancy. “The broad direction here is to be more inclusive, at least when it comes to the Sunni community, and figure out a power-sharing deal.”

The vast majority of Iraq’s Sunni Arab minority do not actively support IS, but analysts say anger over perceived mistreatment by the Shia-led authorities means they are less likely to cooperate with the security forces.

Kamel noted that any military successes could boost Maliki’s chances, with thousands of troops taking part in an ambitious operation aimed at retaking the city of Tikrit, which fell on June 11.

Iraqi forces initially wilted in the face of the onslaught but have since performed more capably, with officials touting apparent progress toward recapturing the city. However, the cost has been high. Nearly 900 security personnel were among the 2,400 people killed in June, the highest figure in years, according to the U.N.

Loyalists are battling militants led by the IS, which Sunday declared a “caliphate,” an Islamic form of government last seen under the Ottoman Empire, and ordered Muslims worldwide to pledge allegiance to their chief. The announcement is an indicator of the group’s confidence, with the IS leader even calling Tuesday for skilled professionals to join, and it marks a move against Al Qaeda, from which the group broke away.

The United Nations on Tuesday raised alarm about “disturbing reports” of the recruitment of child soldiers and other “grave violations” against minors in the conflict, said Leila Zerrougui, the U.N. special representative for children and armed conflict Meanwhile, IS militants captured Albu Kamal, a Syrian town on the Iraqi border, after three days of fierce fighting.