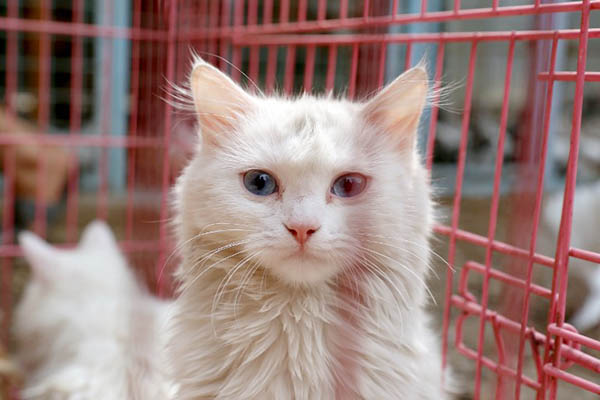 The welfare of stray cats and dogs roaming Iraq’s capital Baghdad is far from a priority for most residents after years of bloodshed and insecurity. Homeless animals typically face cruelty or even extermination on the streets of the city, but now some pet lovers are looking to use social media to change attitudes and find loving owners for the four-legged friends.

Agricultural college student Assan Attallah, 22, has just helped get six dogs adopted after they were found in the impoverished Sadr City neighborhood and is looking for homes for five more.

The successes are the latest since she and a friend launched the “Animal adoption” Facebook page three months back after growing upset over the fate of Baghdad’s stray animals.

“I started this project because I saw animals were being mistreated and people would go as far as poisoning and killing them,” Attallah told AFP as she played with some puppies in an animal shelter. “Many people buy pets at very high prices so why not bring in these animals, take them to the vet and clean them up so people can adopt them?”

So far Attallah has managed to find homes for some 25 animals after posting their pictures online. But trying to convince many locals to care about stray animals is a big challenge.

Some 10 years ago, the authorities resorted to gunning down thousands of stray dogs with automatic rifles after claiming they were overrunning Baghdad. And, in a country where some 400,000 people have been killed since the 2003 U.S. invasion and millions have been displaced since the start in 2014 of a battle against Islamic State group jihadists, Attallah’s focus on helping animals is often met with incomprehension.

“We’ve also been getting negative feedback,” she explained. “People say: ‘Why are you helping animals? They don’t have feelings, they don’t understand. It’s not that important. You should focus on helping people’.”

In a veterinary clinic in the north of Baghdad, Ahmad al-Qaissy, 29, and his colleague Yaarub al-Shimmary, 30, are busy taking care of ginger cat Mishmish—whose name means “apricot” in Arabic—after he was dropped off by an owner who did not want him. The two men head the Iraqi Association for Animal Welfare and have had to treat their fair share of strays in terrible condition.

“Most of those that we receive have been abused either by adults or by children,” Qaissy said. “They need treatment, operations and vaccines.”

After a life spent facing the perils of the street, it often takes a lot to get the dogs or cats into a fit enough state to find a new owner. “Only when the animal is in good health and is not scared anymore are they ready for adoption,” Qaissy said.

Like Attallah, the pair use social media to try to find homes for their patients. “We have 35,000 members on our Facebook page and when people are interested in adoption we ask the candidates some questions to be sure the animals will be treated well,” Shimmary said.

For those lucky enough to find an owner, their new match can turn out to be just perfect. Marina Jaber, 26, dotes over 11-month-old pet dog Majnoona—which means “crazy” in Arabic—after welcoming her into her home.

One of Majnoona’s paws was crushed by a car and Jaber’s husband is looking into bringing back a prosthetic from abroad. “I feel like we were made for each other,” Jaber said of her pet. “I feel responsible for her.”