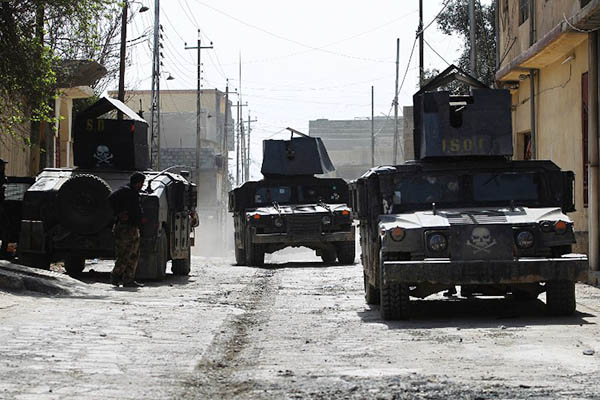 U.S. envoy to anti-Islamic State coalition says jihadists are ‘trapped’ and will not be to escape alive.

Iraqi forces recaptured a third of west Mosul and trapped Islamic State group fighters inside as they made further gains in their battle to retake the city, officials said on Sunday.

Fierce fighting has shaken Mosul in recent days as thousands of U.S.-backed Iraqi soldiers and police battle to reclaim the country’s second city. A renewed push against the jihadists launched on March 5 has seen I.S. forced from several neighborhoods and key sites, including the main local government headquarters and the famed Mosul museum.

By Sunday, Iraqi forces were tightening the noose.

I.S. “is trapped. Just last night, the 9th Iraqi army division… cut off the last road out of Mosul,” said Brett McGurk, the U.S. envoy to the anti-I.S. coalition. “Any of the fighters who are left in Mosul, they’re going to die there,” he said. “We are very committed to not just defeating them in Mosul, but making sure these guys cannot escape.”

Staff Major General Maan al-Saadi of the elite Counter-Terrorism Service said “more than a third” of west Mosul was now under the control of security forces.

Saadi said CTS forces were battling I.S. inside Mosul al-Jadida and Al-Aghawat on Sunday, and Iraq’s Joint Operations Command said they recaptured the latter area later in the day. The JOC also said forces from the Rapid Response Division, another special forces unit, and the federal police were also attacking the Bab al-Toub area on the edge of Mosul’s Old City.

“The battle is not easy… we are fighting an irregular enemy who hides among the citizens and uses tactics of booby-trapping, explosions and suicide bombers, and the operation is taking place with precision to preserve the lives of the citizens,” said JOC spokesman Brigadier General Yahya Rasool. I.S. resistance “has begun to weaken in a big way,” he added.

I.S. seized Mosul in mid-2014 and swept across areas north and west of Baghdad, taking control of swathes of territory and declaring a “caliphate” straddling the border with Syria.

Backed by a U.S.-led airstrikes and other support, Iraqi forces have since retaken 60 percent of the territory they lost, said McGurk. The operation to recapture Mosul—then the last Iraqi city under I.S. control—was launched in October.

After recapturing the east of the city, Iraqi forces last month set their sites on the west, where hundreds of thousands of civilians remain trapped. The U.S.-led coalition launched airstrikes against I.S. in Syria and Iraq in 2014 and is providing a range of support to allied forces in both countries.

McGurk said I.S. fighters were thought to be dying faster than the group can replace them, and also said the coalition had trained nearly 90,000 Iraqi security personnel.

In Syria the coalition is backing an Arab-Kurdish alliance known as the Syrian Democratic Forces that is pushing towards the jihadists’ de facto capital Raqa. “Raqa remains their [I.S.’s] administrative capital, it’s where we think a lot of their leaders are located, it’s where we think they are planning a lot of attacks around the world,” said McGurk.

On Sunday the SDF fought fierce battles with I.S. jihadists east of Raqa around Khas Ajil village, said the Syrian Observatory for Human Rights. SDF forces took control of five villages as they continued a slow advance, said the Observatory.

Turkish-backed rebels are also advancing against I.S. in northern Syria, as are government troops supported by Russia. The Observatory also reported fighting in eastern Aleppo province where the jihadists forced regime troops to fall back from the outskirts of the Jarrah military airport.

Russian and Syrian strikes hit I.S.-held areas in the province, Observatory said, with eight civilians, mostly from the same family, killed in a strike on the village of Maskanah.

Syria’s former Al Qaeda affiliate Fateh al-Sham Front said meanwhile it was behind twin bombings targeting Shia pilgrims in the center of Damascus that killed 74 people. “On Saturday… a twin attack was carried out by two heroes of Islam… in the center of the capital Damascus, killing and wounding dozens,” a statement said.

The Observatory said 43 Iraqi pilgrims were among those killed when a roadside bomb detonated as a bus carrying pilgrims made its way through the Ban al-Saghir area of Damascus’s famed Old City and a suicide bomber blew himself up. The attack also killed 11 Syrian civilians and 20 members of pro-government security forces, it said.

Shia shrines have been a frequent target of attack for Sunni extremists of I.S. and Al Qaeda during Syria’s devastating six-year war.