Home Latest News ‘Iron Lady of Balochistan’ to be Recognized by U.S.

‘Iron Lady of Balochistan’ to be Recognized by U.S. 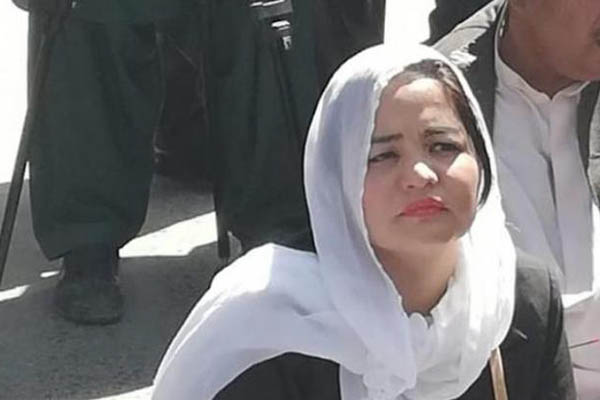 A Pakistani human rights activist from Balochistan, Jalila Haider, will on Wednesday (today) be among the recipients of the International Women of Courage Awards from the U.S. Department of State.

In a press release issued on Tuesday, the U.S. State Department announced that Haider, the ‘Iron Lady of Balochistan,’ is the first female attorney of the Hazara community in Pakistan. Noting that she founded ‘We the Humans—Pakistan,’ a non-profit organization dedicated to lifting local communities by strengthening opportunities for vulnerable women and children, the statement said the award would celebrate the extraordinary accomplishments of these women.

First Lady Melania Trump is scheduled to deliver remarks at the 14th annual awards ceremony, while Secretary of State Mike Pompeo would host it. Since the award was launched in March 2007, the State Department has recognized 134 women from 73 countries. After the awards ceremony, the 12 recipients are scheduled to participate in an International Visitor Leadership Program visiting various cities across the United States, before reconvening in Los Angeles for the conclusion of their program on March 16.

Haider, said the State Department statement, specializes in defending women’s rights and provides free counseling and legal services to poverty-affected women. She also led a peaceful hunger strike to recognize the right to life for the Hazaras following a series of targeted attacks by extremists. She has also taken up the cause of many other vulnerable communities and as Balochistan’s President of the Women Democratic Front and Balochistan’s branch of the Aurat March, she has fought against violence against women in public spaces, at work, and at home.

In addition to Haider, 11 other women would also be recognized by the U.S. State Department. Zarifa Ghafari of Afghanistan is being recognized for becoming the mayor of Maidan Shar, where she refused to let death threats deter her and became a symbol of women’s empowerment in her country; Lucy Kocharyan of Armenia is a journalist who has championed children with mental health issues; Shahla Humbatova, Azerbaijan, is a defense lawyer who has consistently defended individuals facing punishment for exercising fundamental freedoms; Ximena Galarza of Bolivia is a journalist whose interviews impacted her country’s history by demonstrating fraud in last year’s elections; Claire Ouedraogo of Burkina Faso has been recognized in her homeland for her work dedicated to protecting vulnerable women threatened by female genital mutilation/cutting and terrorism; Sayragul Sauytbay of China was among the first victims to speak publicly about her country’s state-backed campaign against ethnic Muslims, igniting a movement against these abuses; Susanna Liew of Malaysia has fought on behalf of members of religious minorities who disappeared in Malaysia or who face persecution for their beliefs; Amaya Coppens of Nicaragua is one of the leaders of the 19th of April Student Movement and has participated in numerous protests against the Sandinista government and the violent, repressive tactics deployed by its security forces; Amina Khoulani of Syria is a survivor of the Assad regime’s detention and torture centers; Yasmin al Qadhi of Yemen was one of the first women to write articles for local newspapers during the Arab Spring pro-democracy protests in Sanaa and is a strong advocate of women’s empowerment and meaningful participation in civil society and the U.N.-led peace process; and Dr. Rita Nyampinga, Zimbabwe, has been a human rights defender for more than 35 years, fighting for gender equality in the workplace since she joined a trade union in 1983.