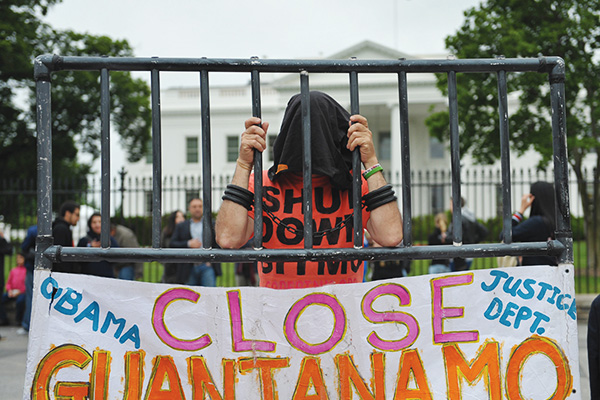 The White House gets an unlikely assist from the Tea Party.

Since U.S. President Barack Obama vowed last May to revive his efforts to close the detention facility at Guantánamo Bay, there have been small, symbolic signs of progress.

State Department envoy Cliff Sloan and White House Chief of Staff Denis McDonough have visited Guantánamo; Lisa Monaco, Obama’s counterterrorism adviser, has staffed her office with Gitmo experts from the Justice Department. But the real question has always been whether Capitol Hill would be any more hospitable to the goal of shuttering the facility than it has been, and whether Obama would demonstrate the political will to get it done.

On both scores, advocates of closing the prison may have reason to be hopeful. The big hurdle for Obama has been getting around onerous congressional restrictions against transferring detainees out of Gitmo, including an absolute ban against sending them to the U.S. But now the Senate Armed Services Committee has approved language in the latest defense authorization that would permit the transfer of detainees to the U.S., either for medical treatment or, significantly, for detention and trial. Meanwhile, Obama may be garnering support from an unlikely quarter: The Tea Party’s Sen. Rand Paul blasted Guantánamo at a recent GOP event in South Carolina and implored Republicans to “stand up for our system.”

Perhaps the most important development is that the administration appears ready to act on its own authority to start repatriating some of the 166 detainees still at Guantánamo. Congress had required that the secretary of Defense certify that any prisoners transferred to their country of origin or third countries not return to the battlefield, an almost impossible standard to meet.

More recently, Congress allowed the administration to waive the certification requirements so long as the defense secretary could “substantially mitigate” any risk that a released detainee would engage in terrorism once released. The administration has never used that waiver. But two senior administration sources tell Newsweek that Obama is now actively considering doing so. Initially, the waivers would be used for prisoners whose home countries have a good record of safely resettling Guantánamo detainees. Morocco, Algeria, and Saudi Arabia could soon start receiving Gitmo prisoners. (Transfers to Yemen, a country in the grip of an Al Qaeda insurgency, would have to wait.)

Sloan, the Gitmo envoy, was unambiguous about efforts to start emptying the prison. He told Newsweek: “We are working as hard as we can and as quickly as we can to move forward, including discussions with foreign governments on possible transfers.”

Lawyers who have represented Gitmo detainees are optimistic. “This is very encouraging,” says Thomas Wilner. “It is an important first step in closing the Guantánamo prison, which hurts our country every day it remains open.”