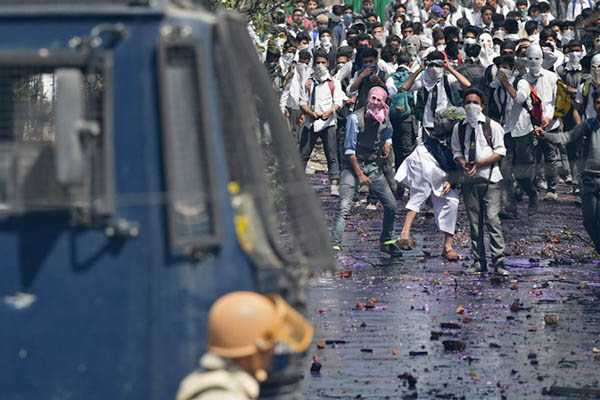 New Delhi has 500,000 troops deployed in India-administered Kashmir and has killed over 100 civilians in the Valley in the past year, following the killing of militant leader Burhan Wani. The world is disgusted with what India is doing in the restive region to exert control over the disputed territory, where a large number of Kashmiris now want to either join Pakistan or be granted an independent state.

India’s ruling Bharatiya Janata Party (BJP) couldn’t find a partner with whom to form a majority in the Kashmir assembly and had to join up with Peoples Democratic Party (PDP) of Chief Minister Mehbooba Mufti, who advocates a “soft separation” from India and wants New Delhi to talk to Islamabad. Her appeals to New Delhi to go soft, however, have fallen on deaf ears. Opposition leader Dr. Farooq Abdullah of Kashmir’s National Conference party says India is losing the Valley. A recent parliamentary election there had a turnout of only 7 percent, which is significantly lower than the past, when the uprisings were much larger.

The world can hardly do anything. It accepted as prime minister of India a man who had arranged pogroms of Muslims in Gujarat. It continues to watch helplessly as Indian courts and the executive lose ground to BJP-RSS Hindutva thugs slaughtering Muslims over allegations—often proven false—of slaughtering cows. The world has no alternative to “stable” India. It can’t choose “unstable” Pakistan because Islamabad is guilty of similar, if smaller scale, atrocities under its controversial blasphemy law. The international community also believes that Pakistan continues to send terrorists to India-administered Kashmir and Afghanistan and allows safe harbor to militants groups like the Haqqani Network even as the neighboring country struggles to achieve peace after nearly 16 years of warfare.

Pakistan knows it has lost the world’s support on Kashmir—the self-confessed “international isolation” came out in the Dawn Leaks controversy—because its jihad implosion is spilling into neighboring states. There is more trouble in Pakistan than India, which means the world despises New Delhi for what it is doing to itself these days but fears nuclear Islamabad and its irreconcilable civilian-military contradictions more.