Home Culture Is She the World’s Most Powerful Collector?

Is She the World’s Most Powerful Collector? 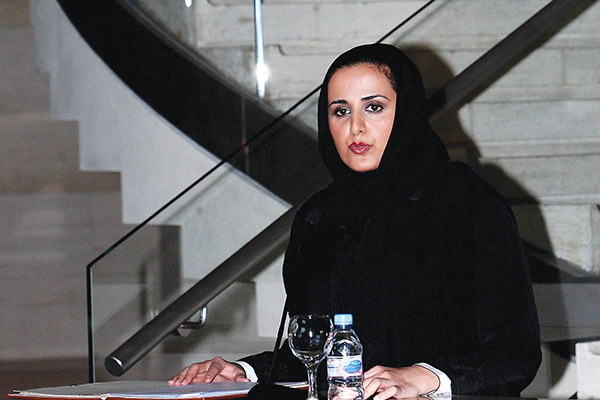 Mayassa al-Thani may be a ‘tomboy’ princess. But she’s also turning Qatar into a grand museum.

[dropcap]M[/dropcap]aybe it was inevitable that as Mayassa al-Thani grew more powerful, she would grow more quiet, more distant from her old friends, and, of course, more distant from the public. As a favored daughter of the emir of Qatar and the chair of its Museums Authority, when she wants to make statements, now she does so with her nation’s (and her family’s) checkbook. And even then, she rarely confirms the transactions in the press.

Last year the big buy was a Cézanne for $250 million, the highest amount ever paid for a painting by anyone of anything anywhere. To edify her country, Mayassa has also called on the greatest architects and monumental artists in the world to create Qatar’s citadels of culture. I. M. Pei designed the Museum of Islamic Art, which opened in 2008; Jean Nouvel’s National Museum of Qatar is due to open next year. Sculptor Richard Serra reshaped the Doha waterfront to accommodate a towering mass of steel he calls 7.

Sheikha Mayassa is today being labeled, at age 30, one of the most powerful people in the art world. But even if that’s true, I find her regal image, protected by walls of protocol and swaddled in the formless cloth layers of her abaya, a little hard to square with the adventurous young woman her friends say she used to be. And clearly she does, too. “We’re continuously trying to straddle different worlds, different cultures, and trying to meet the challenges of different expectations from ourselves and from others,” Mayassa told the audience at a TEDxWomen talk, a spinoff of the famous lecture series organized for Doha and Washington, D.C., in 2010. Mayassa was a little shaky on stage, but her natural warmth showed through. “I’m a representation of that phenomenon,” she said.

In the not-too-distant past, Mayassa and her younger sister Hind became the first women of the royal house of Qatar to be sent to school in the United States. “Mayassa was just this tomboy who would come to class in jeans, her hair all over the place,” remembers one of her professors at Duke University. “She is extraordinarily quick about picking up on things,” said another. “She sees something, she relates to it, and then she wants to photograph it.” Wherever Mayassa went, he said, she was thinking about what she could use to make Qatar—so rich and such a tabula rasa—a better, more cosmopolitan place: one that could reach out and embrace the most wonderful things the wide world has to offer without losing a sense of self. “We believe,” she would say later, “in the security of having a local identity.”

One of the books Mayassa had to read at Duke was Amin Maalouf’s novel Leo Africanus, based on the life of a famous 16th-century Arab traveler who was “circumcised at the hand of a barber and baptized at the hand of a pope,” as we learn on the first page. “I am now called the African, but I am not from Africa, nor from Europe, nor from Arabia,” says the traveler. “I come from no country, from no city, no tribe. I am the son of the road, my country is the caravan, my life the most unexpected of voyages.”

Mayassa loved it. And she had an idea. In 2004 she proposed to Profs. Bruce Lawrence, in Duke’s religion department, and miriam cooke (who writes her name all lowercase), in the Middle East studies department, that they organize a trip following in Leo’s footsteps, traveling to Granada, Fez, Cairo, and Rome.

Mayassa’s parents, Sheikh Hamad bin Khalifa al-Thani and his shrewd, powerful second wife, Sheikha Mozah, at first refused to let Mayassa go. They finally agreed only on the condition that she take her younger brother along, too. Because it was a trip for 18 students on a budget, they were booked into two-star hotels, two to a room, with no air-conditioning. Mayassa didn’t complain.

Then, on the third day in Granada, Mayassa told the professors, “Oh, Mom and Dad have arrived and would like to take everybody out to dinner.” The royals were traveling low profile in European clothing, although that’s not easy for a man as big as the emir or a woman as striking as Mozah, who, Western garb or not, almost always wears a turban of some sort. After a brief evening of opulence, Mayassa went back to the two-star.

The moments of crisis on the trip were sometimes funny: Mayassa threw away a train ticket along with a food wrapper, and she was very upset. Of course she could have bought another, but that didn’t seem, to her, the right thing to do. In the end, her brother dug through half the trash cans in the station until he found it. Sometimes they were more fraught: the group got lost riding in the Atlas Mountains and had to call in a helicopter.

But the trip went on, and the princess with it, through Cairo and Rome: an experience that would shape Mayassa’s views and ambitions for years to come. “We were in the strange position of teaching someone from a very strict Muslim family, by her lineage, the history of her own culture,” says Lawrence. Even a decade ago, Qatar was more sand than civilization. But amid the glories of the Alhambra, the dense beauties of Fez, and the crumbling magnificence of Cairo’s ancient Islamic quarters, you could breathe the spirit of something vast and magnificent. Today, notwithstanding the spectacular purchases of Western art that catapulted Mayassa to the pinnacle of power in the Western-dominated art world, it’s in the Arab world that she still hopes to find the greatest revelations. “In the years to come,” she said in 2010, “we’ll be learning a lot about our Picassos, our Légers, and our Cézannes.”

Although the young sheikha’s power lies in the realm of museums, part of her heart is in Hollywood, and according to Lawrence and cooke, she wanted to make a movie out of Leo Africanus. Once she graduated from Duke in 2005, there were long talks with Robert De Niro and Martin Scorsese about directing it. But Tinseltown is always full of talk, and there has never been the least bit of buzz about this movie. What did get started was the Doha version of the Tribeca Film Festival, under Mayassa’s wing and De Niro’s, with Scorsese as one of the first guests of honor.

When I talked to Lawrence and cooke about all this on the phone, there was in their voices an unmistakable tone of regret about what has happened with Mayassa in the years since then. Of course people mature, they marry, they raise families and build careers, and they drift away from that old gang of theirs. But with Mayassa, there’s a sense, almost a theatrical sense, of shedding youth and assuming responsibility. As the professors talked, I thought of Prince Hal becoming Henry V, or, maybe more appropriately, of Audrey Hepburn returning to her role as princess at the end of Roman Holiday. One woman who visited Mayassa in 2008 remembers her arriving at the appointment 30 minutes late, striding down a long hall in an abaya that actually had a train.

“Her mother, Sheikha Mozah, is very, very controlling,” says cooke. Many of Mayassa’s friends from Duke were invited to her wedding in 2006, and even then “her mother was trying to make it entirely clear to everyone that Mayassa was not the schoolmate that she used to be,” cooke remembers. Lawrence and cooke went to Qatar in 2010 as scholars-in-residence at the Museum of Islamic Art and saw Mayassa a few times in the several months they spent in Doha, but they have lost touch since then. “She is totally un-contactable now,” says cooke.

There is a grand design for Qatar somewhere: as a center of culture, as a paradigm of a new kind of cosmopolitan, global existence where identities mix, but don’t necessarily blend. But as I think about Mayassa in the terms used by Forbes magazine to describe her, as “arguably the most powerful woman in the art world today,” I am left wondering whether she will be the architect of that brave new world, or its victim.