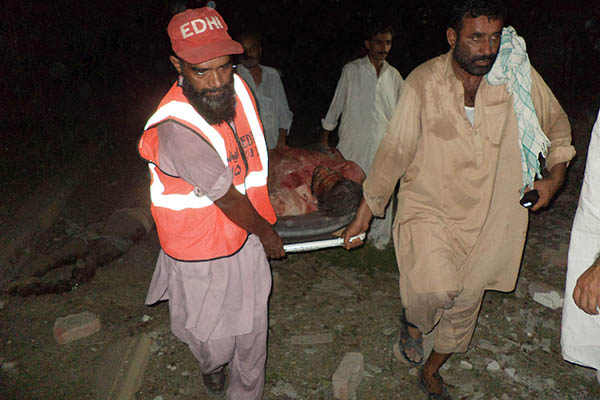 The dead included five attackers, and four intelligence and government officials in what was an unprecedented attack in the otherwise sleepy town of Sukkur. Homegrown Taliban group, the Tehreek-e-Taliban Pakistan claimed responsibility for the attack, terming it retaliation for the death of senior militant commander Wali-ur-Rehman.

State TV said at least 38 people were wounded in what has been one of the bloodiest attacks blamed on Islamist militants in Pakistan so far during the month of Ramzan.

Police said the attackers stormed the complex of offices and homes for senior officials, including from the Inter-Services Intelligence (ISI) agency, as people broke their fast after sundown. They detonated two bombs—first outside a police building and then a car bomb outside the ISI office in the town.

A police official said apparently a suicide bomber first blew himself up in front of a police building and then a second suicide bomber detonated the explosive laden car outside the ISI office. “Armed people have attacked. Apparently it is an organized terrorist attack, we have sent a heavy contingent of police to the site,” said Javed Odho, a Sukkur police officer.

A hospital official said that the bodies of an ISI agent and another government employee had been brought into the morgue, and that 15 other people had been admitted with injuries.

The ISI has been a frequent target for the country’s Taliban movement as it wages a domestic insurgency, although Sukkur has traditionally been immune from such violence.

“A total of seven people were killed and several injured,” said Maj. Gen. Rizwan Akhtar, head of the paramilitary force, Sindh Rangers. “The dead included three attackers, two suicide bombers and two others,” he added. “We rounded up several people on Wednesday night after the attack and are interrogating them,” the Rangers official said.

Ahmed Marwat, spokesman for the TTP’s Jandullah group, claimed responsibility for the attack. “We sent four suicide bombers and our target was the ISI,” he told journalists. “It was revenge for the killing of Wali-ur-Rehman.” Rehman was reportedly killed in a U.S. drone strike earlier this year.

The spokesman also told journalists the TTP would continue to target security forces for targeting them in military operations. “These [intelligence officials] are the friends of U.S. and until they refrain from their coalition with the U.S., we will continue to target them,” he added.

The ISI is Pakistan’s most powerful spy agency, which has been attacked several times in the past by Islamist militants. In May 2009, a suicide attack outside a police building next to the local ISI headquarters in Lahore killed 24 people. In November that year a powerful car bomb ripped through ISI’s headquarters in Peshawar, killing 10 people and destroying part of the fortified building.

A month later in Multan two suicide attackers fired at soldiers while driving a truck bomb past security checkpoints in an attempt to approach the local office of the ISI.

Prime Minister Nawaz Sharif has strongly condemned the attack, which he said resulted in the “loss of precious human lives and injured many.”