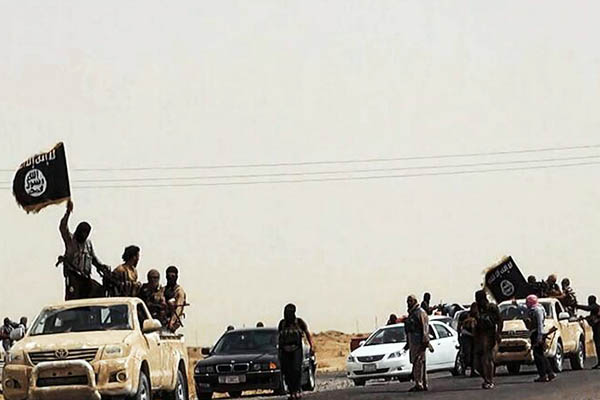 The ISIL jihadists whose sweeping Sunni militant offensive has captured swathes of Iraq have declared an “Islamic caliphate” in their territory as Iraqi forces battle to retake Tikrit.

The Islamic State of Iraq and the Levant (ISIL) on Sunday announced it was establishing a caliphate—an Islamic form of government last seen under the Ottoman Empire—extending from Aleppo in northern Syria to Diyala in Iraq, the regions where ISIL has fought against the regimes in power.

In an audio recording distributed online, ISIL declared its chief Abu Bakr al-Baghdadi the “caliph” and “leader for Muslims everywhere.”

Though the move may not have a significant impact on the ground, it is an indicator of the group’s confidence. The crisis in Iraq is said to rival the brutal sectarian war of 2006-2007, with more than 1,000 killed and hundreds of thousands displaced within weeks. Alarmed world leaders have urged a speeding up of government formation following April elections, warning the conflict cannot be resolved by force alone.

While beleaguered Prime Minister Nuri al-Maliki has conceded a political solution is necessary, his office has for days touted the Tikrit operation, which could be crucial tactically, and for morale in the security forces. “The security forces are advancing from different areas” around Tikrit, said Lt. Gen. Qassem Atta. “There are ongoing clashes.”

Atta said troops had detonated bombs planted along routes into the city, which militants took more than two weeks ago. Witnesses reported waves of government airstrikes in central Tikrit and Saddam’s former palace compound in the city. The Iraqi forces, according to Atta, are coordinating with recently arrived U.S. military advisers in “studying important targets.”

Maliki’s national reconciliation adviser, Amr Khuzaie, said the crisis was even more dangerous than the brutal Sunni-Shia violence that left tens of thousands dead. “Now, the danger is definitely more … than 2006, 2007,” he said.

Before, militant groups sparked a “sectarian war, but now [the] war is more organized” and the militants’ abilities were greater. U.N. Secretary General Ban Ki-moon has raised grave concern about human rights violations and “the rising number of civilian deaths and injuries, with over one million Iraqis having fled their homes due to the fighting,” his spokesman said.

The onslaught that ISIL led this month overran parts of five Iraqi provinces after capturing the Syrian province of Deir Ezzor near Iraq, Raqa in the north, and parts of Aleppo province. Its leader Baghdadi, who once spent time in an American military prison in Iraq, is touted within ISIL as a battlefield tactician, and is increasingly seen as even more powerful than Al Qaeda leader Ayman al-Zawahiri.

Experts say the announcement of the caliphate could open a new era of jihadism with a powerful new leadership. The caliphate is “the biggest development in international jihad since September 11,” said Charles Lister of the Brookings Institution in Doha, referring to the Al Qaeda attacks on the United States. “It could mark the birth of a new era of transnational jihadism … and that poses a real danger to Al Qaeda and its leadership,” the expert said, adding that ISIL with members in many countries is the richest jihadist group.

ISIL’s announcement came as Iraq took delivery of the first batch of warplanes from Russia, with the newly purchased Su-25s expected to be pressed into service soon. An Iraqi official said pilots from Saddam Hussein’s air force would fly the planes. Su-25s are designed for ground attack, meaning they would be useful for Iraqi forces trying to root out ISIL-led militants from a string of towns and cities they have seized.

Washington has stopped short of calling for Maliki to quit but has left little doubt it feels he has squandered the opportunity to rebuild Iraq since American troops withdrew in late 2011. Maliki’s security spokesman has said hundreds of soldiers have been killed since the insurgent offensive was launched on June 9, while the U.N. puts the overall death toll at more than 1,000, mostly civilians.

World leaders have insisted on a political settlement among Iraq’s various communities and Grand Ayatollah Ali al-Sistani, revered among the country’s Shia majority, has urged political leaders to quickly form a government after parliament convenes on Tuesday.

Israeli Prime Minister Benjamin Netanyahu on Sunday called on the international community to back the independence of Iraq’s Kurds as well as support for Jordan amid fears that ISIL might extend its control into that country.

Iraqi Kurdish leader Massud Barzani has said Baghdad could no longer object to Kurdish self-rule in Kirkuk and other areas from which federal forces withdrew as the insurgents advanced. Kurdish forces moved into areas vacated by Iraqi federal soldiers, putting them in control of disputed areas that they have long wanted to incorporate into their three-province autonomous region, a move Baghdad strongly opposes.