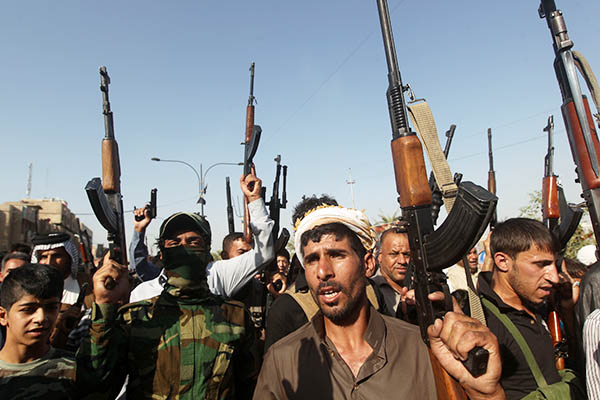 Militants battled Iraqi security forces for control of a strategic northern town on Monday, prompting half the area’s population to flee, as Washington weighed drone strikes against jihadist fighters.

The United States and Iran briefly discussed the weeklong crisis on the sidelines of nuclear talks in Vienna as the rivals mulled their “shared interest” in preventing Sunni insurgents from gaining a foothold in Iraq. Jihadists of the Islamic State of Iraq and the Levant (ISIL) are said to have killed scores of Iraqi soldiers as they pushed an advance on the capital, including in a “horrifying” massacre that has drawn international condemnation.

In the latest fighting on Monday, Sunni Arab militants took control of several neighborhoods of Tal Afar, a mainly Shia Turkmen town between the rebel-held city of Mosul and the Syrian border, officials and residents said. Local official Abdulal Abbas said Tal Afar was dealing with “martyrs, wounded, chaos and refugees,” and that around 200,000 people—nearly half the area’s population—had fled. The town, which forms a Shia enclave in otherwise Sunni Arab and Kurdish-dominated Nineveh province, had initially held off the offensive that saw fighters led by ISIL seize Mosul—a city of two million people—and then a vast swathe of territory north of Baghdad in a matter of days.

As Washington weighed its next move in the crisis, U.S. Secretary of State John Kerry said on Monday that drone strikes could be used, after President Barack Obama said he was considering “all options” on how to support the Iraqi government.

Drones might not be the “whole answer,” Washington’s top diplomat told Yahoo News, “but they may well be one of the options that are important to be able to stem the tide and stop the movement of people who are moving around in open convoys and trucks and terrorizing people.”

About 275 U.S. military personnel were being deployed to Iraq to help American personnel and protect the embassy in Baghdad, Obama said. Washington has already deployed an aircraft carrier to the Gulf, but Obama has ruled out a return to Iraq for U.S. soldiers, who left the country at the end of 2011 after a bloody and costly intervention launched in 2003.

While the U.S. has ruled out cooperating militarily with Tehran, the two nations—which have been bitter foes for more than 30 years—held “brief discussions” on the crisis in Vienna. It is yet to be determined “if we want to keep talking to Iran about Iraq,” State Department deputy spokeswoman Marie Harf told CNN, acknowledging that Tehran and Washington had a shared interest in ensuring militants do not get “a foothold any more in Iraq.”

State Department spokeswoman Jen Psaki urged Iran to act “in a non-sectarian way” as it engages in Iraq. Usually, Washington demands that Tehran not intervene at all. The sweeping unrest has prompted Australia, France and the United States to pull out some diplomatic staff. The United Nations has also moved dozens of its international staff out of Baghdad.

The Iraqi government has insisted it is making progress in retaking territory from the militants, who currently hold most or parts of four provinces north of Baghdad. It said on Sunday that security forces had killed 279 militants and that soldiers have recaptured towns north of Baghdad.

The toll could not be independently confirmed, and Iraqi officials often tout high numbers of militant deaths while downplaying their own casualties. As troops began to push back against militants, evidence of brutal violence against members of the security forces emerged.

The U.S. and the U.N. condemned a massacre in which ISIL militants appear to have killed scores of soldiers around the city of Tikrit, executed dictator Saddam Hussein’s hometown. Photos posted online were said to show jihadists summarily executing dozens of captured members of the security forces in the Tikrit region, with tweets attributed to ISIL claiming they had killed 1,700 in all. The photos and the claims could not be independently verified.

The international outcry came as the offensive that the militants launched in Mosul on June 9 entered its second week. Iraqi forces performed poorly early on, abandoning vehicles and positions and discarding their uniforms, with militants reaching within 100 kilometers of Baghdad. The embattled security forces, who have done better in recent days, will be joined by a flood of volunteers after a call to arms from top Shia cleric Grand Ayatollah Ali al-Sistani, but a recruitment center came under attack on Sunday, leaving six people dead.