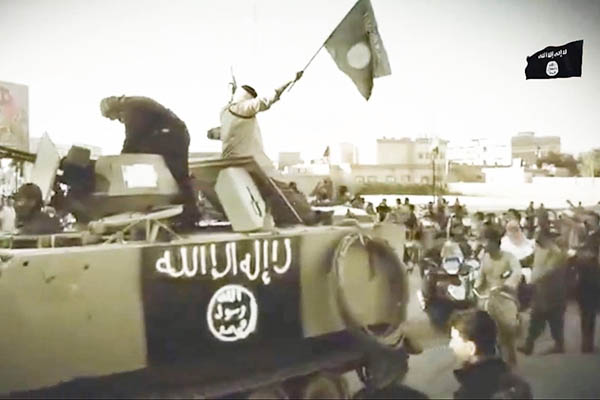 A still from an ISIL propaganda video posted on YouTube. AFP

Militant group in Iraq and Syria is waging a propaganda war alongside its ground assault.

Supporters of a powerful jihadist group are waging an online propaganda war in concert with its battles on the ground in Iraq, where Sunni militants have overrun swathes of the country.

For militant groups, the fight over public perception can be even more important than actual combat, turning military losses into propaganda victories and battlefield successes into powerful tools to build support for the cause.

The offensive, led by jihadists from the Islamic State of Iraq and the Levant (ISIL) but involving other Sunni groups as well, swept down from northern Iraq, overrunning major areas of five provinces and reaching less than 100 kilometers from Baghdad.

As the militants advanced on the ground, they also did so on microblogging site Twitter, where users posted a near-constant stream of updates and photos. “They put not just other insurgent groups to shame, but even legitimate companies that are trying to sell products online,” Aaron Zelin of the Washington Institute for Near East Policy said of ISIL’s public relations efforts. “They are very, very good.”

As Iraqi security forces wilted in the face of the initial offensive, ISIL supporters posted pictures of captured military vehicles and positions on Twitter, as well as short accounts of attacks. After the group seized most of the northern province of Nineveh, photos of it bulldozing the berm dividing Iraq from Syria in a symbolic unification of the two countries appeared online as well.

And when ISIL claimed it executed Iraqi security forces members in Salaheddin province, images of militants firing on scores of men, who lay facedown in shallow ditches as blood pooled in the sand, were posted on Twitter and elsewhere online.

ISIL has made propaganda strides, said Charles Lister, a visiting fellow at the Brookings Doha Center. “ISIL appears to be fusing both quantity and quality increasingly effectively,” Lister said. “The constant flow of material and its high quality provides followers with the image of a highly organized, well-equipped organization seemingly [worthy] of joining,” he said. “For this reason, countering this propaganda material should arguably be seen as being as important as stemming the intensity of conflict in the region.”

On Twitter, major events are often given hashtags that allow users to easily search for related content. Supporters of ISIL have hijacked World Cup hashtags in English and Arabic to share pro-ISIL content, seeking to capitalize on the international football frenzy to push their message. And they have used various ISIL-specific hashtags to share content about the group and its operations in Iraq.

“They have a really smart plan. All jihadi groups are very good at what they do, but ISIL really stands out,” said Zelin. “They have been targeting their messages to people of different languages using popular hashtags [and] they have also created their own [application] for Twitter,” he said.

Zelin said the application, which has since been discontinued, would send out the same message on all linked Twitter accounts, “so it would flood things.”

The fate of the application illustrates a problem faced by jihadists on Twitter and other social media sites that have rules under which users advocating violence or posting other objectionable content may be suspended or banned. When the offensive began late on June 9, there were ISIL-affiliated Twitter accounts dedicated to various “wilayas,” or states, into which the group divides Iraq. But some accounts covering areas where the fighting took place were suspended by Twitter as the offensive progressed.

For ISIL, “the question will be, how do they react and evolve or be able to continue to communicate to a broader audience,” Zelin said.

Nathaniel Rabkin, the managing editor of the Inside Iraqi Politics newsletter, said that ISIL is also carrying out on-the-ground propaganda efforts in Iraq, such as “holding mass ‘repentance’ gatherings, where policemen, soldiers, and Sahwa [militia] men pledge to stop working with the government.”

“I suspect these street theater type of events are more important avenues of propaganda for [ISIL] inside Iraq than the videos posted online, which may be more directed at an international audience,” he said.