Islam—As Explained by an Indie Rocker 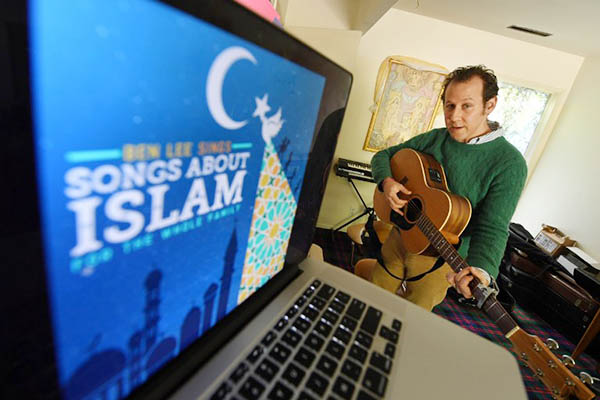 Distraught by the treatment of Muslims in Donald Trump’s America, indie rocker Ben Lee felt he could seize on his own skills to encourage understanding.

The former frontman of the group Noise Addict has recorded an album of songs about Islam and, hoping for the greatest impact, geared them toward children. With chipper arrangements that would be at home in kindergarten classrooms, Ben Lee Sings Songs About Islam for the Whole Family explains the religion’s core beliefs with references to the Quran.

Lee, an Australian who lives in Los Angeles, said he knew the power of songs through his career and also by observing his seven-year-old daughter. “That’s the beauty of the pop song—you can say anything, and if you say it in two and a half minutes with a catchy chorus, it becomes digestible,” said the affable 38-year-old. “I think I’m at the point in my life where you start realizing that any lasting effect that you’re going to have on the human race is going to be through the influence you can make on the next generation,” he told AFP with a chuckle.

Lee will donate all proceeds from the album to the American Civil Liberties Union, which has aggressively challenged Trump on rights issues including his sweeping ban—since suspended by the courts—on travelers from seven Muslim-majority nations.

But Lee does not see his album, which comes out Friday, as political. Instead, he is hoping to bring a nuanced understanding of religion.

Lee, who grew up Jewish, said he had reached a spiritual “fork in the road” where he could no longer take religions literally but wanted to appreciate them.

The album’s goal “is to focus on the commonalities and on beginning to think mythologically about these cultural narratives—and introducing children to thinking in that way as opposed to thinking literally,” Lee said. “All of these religions are like Greek myths or Shakespeare. They provide great insights into humanity.”

The music on Ben Lee Sings Songs About Islam for the Whole Family is upbeat and direct. On “Ramadan,” Lee strums a folk-rock guitar to maracas and a bit of jazzy piano as he explains the holy month of fasting.

“Ramadan, oh Ramadan / We’re so happy when you come / And sad to leave you when you’re gone / We’ll miss you, Ramadan,” he sings.

On “La Ilaha Il Allah,” Lee turns the core Arabic-language creed of Islam—“There is no God but God”—into a campfire-like sing-along alongside religious stories. Lee then goes into a rocking chorus to tell the religion’s meaning on “Islam Means Surrender.”

Lee said he has read much of the Quran and studied Sufism, Islam’s mystical movement that embraces music as a spiritual path. More conservative Islamic schools, notably the Wahhabis who dominate Saudi Arabia, frown on music in religion.

Lee said he fully intended his album to be respectful. “I’m not depicting pictures of [Islam’s Prophet],” he said, in reference to Islam’s general prohibition on such images, “I’m singing songs.”

“I would never want to do something that’s perceived as an insult.”

Lee has been working on five separate albums on major religions—Buddhism, Christianity, Hinduism, Islam and Judaism—but said he hurried out his latest work in light of current events.

Lee, who has collaborated with leading alternative rockers including Liz Phair and Dinosaur Jr.’s Lou Barlow, in 2013 put out an album on his experiences with ayahuasca, the psychedelic brew from Amazonian shamans. “I’ve always been interested in taking fairly fringe concepts and making them palatable,” he said.

In a political climate that some have described as “post-truth,” Lee said his look into religion was all the more timely. “All religions—no matter how much they’ve been misinterpreted by fundamentalists and by orthodoxy and literalists—at their core are about a search for truth,” he said.