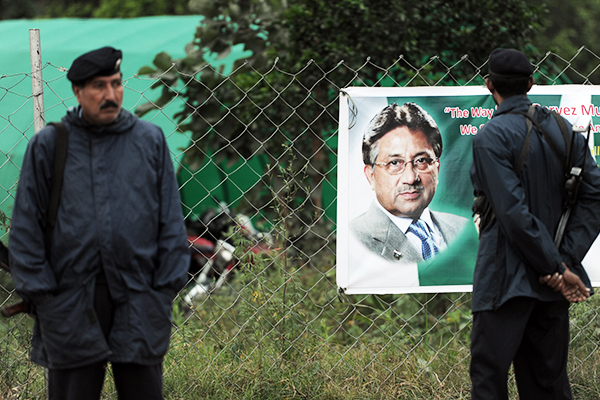 Interior minister says the move is not ‘revengeful.’

Pervez Musharraf, Pakistan’s former president and Army chief, is set to be tried for treason for imposing a state of emergency in November 2007, the country’s interior minister, Chaudhry Nisar Ali Khan, announced at a press conference on Sunday.

“Following the judgment of the Supreme Court and a report submitted by an inquiry committee, it has been decided to start proceedings against Gen. Pervez Musharraf under Article 6 of the Constitution,” Khan said. “It is happening for the first time in the history of Pakistan and the decision has been taken in the national interest.”

Khan said his government would request Chief Justice Iftikhar Chaudhry, who was twice sacked and detained by Musharraf in 2007, to form a three-judge tribunal for the proceedings.

The announcement of the trial came amid renewed criticism of the five-month-old government’s inability to manage the security situation in Pakistan. As such, it is viewed by analysts as a means of diverting public attention away from official lapses.

“The government would not be successful in this move because it has no credibility,” says analyst Hasan Askari Rizvi. It “is taking an uncharted course of action which would involve a lot of complications and may add to its headaches.”

Afshan Adil, a member of Musharraf’s legal team and representative of his All-Pakistan Muslim League, denounced the decision. “We are not worried over this decision by government. We will face this case like all other cases, and we have come out clean in all of those,” she says. “The government has brought up this case now to divert the attention from its failure to protect [the] people.” Another Musharraf spokesman, Raza Bokhari, also criticized the move. “We view with grave suspicion the timing of the announcement by the Taliban-sympathetic Nawaz Sharif government to initiate treason proceedings against former President Musharraf,” Bokhari said in a statement referencing the government’s willingness to hold talks with the Pakistani Taliban. “We not only forcefully reject these charges, but also view them as a vicious attempt to undermine the Pakistan Military.”

Authorities have come under fire for failing to prevent sectarian clashes that left nine dead and 60 injured in Rawalpindi, which remains under curfew after troops were called in to hold the peace. Interior minister Khan, who is responsible for the country’s security, said that three-time Prime Minister Nawaz Sharif’s government had never demonstrated any “revengeful” gesture toward Musharraf.

Musharraf left the country in 2008 and returned from self-exile in March. He was placed under house arrest in April and recently won his freedom, but remains confined to his house in Islamabad for security reasons.

Meanwhile, the Sindh High Court today postponed hearing Musharraf’s request that his name be removed from the exit-control list allowing him to travel abroad. The hearing was postponed after Pakistan’s attorney-general did not show up in court. The next hearing is set for Nov. 22.

It is time for another revolution. Things are not good in Pakistan. Someone must take a charge and settle the mess.
1. A selection criterion of Judges in Judiciary has created impasses which need to be rectified.
2. Handpicked judges from few selected chambers have been given dictatorial powers which are counter indicated for democracy & Justice System in Pakistan.
3. The status of judges needs readjustment in light of their capabilities & performance.
4. Foreign paid media is spreading despair in country and building opinions contrary to the unity & tranquility of country.
5. Political leadership is shy of accepting responsibility & incapable to take timely and hard decisions which are need of the time.
6. There is no one who stands for Pakistan. Judges have released terrorists; religious leaders have aligned with terrorists & become existential threat to State.
Someone has to accept the responsibility at peril of his life and come forward to save the sacred state of Pakistan.