Islamabad Cracks Down on Illegal Slums 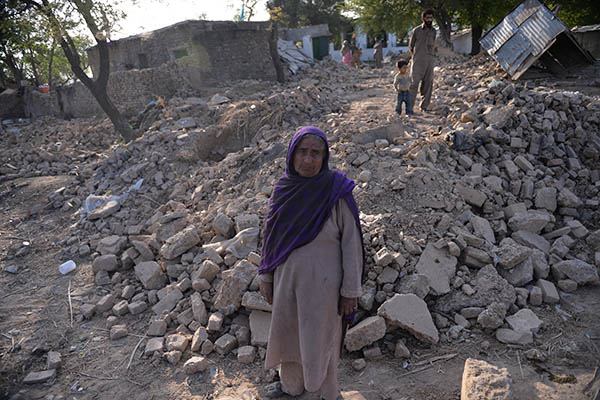 Mirjan stands in front of the rubble that used to be her house. Aamir Qureshi—AFP

Wrapped in a purple shawl, Mirjan wanders downcast among the ruins of the Islamabad slum where she lived, newly demolished. Authorities in the capital have declared war on the slums, largely populated by Christians and Afghan refugees, saying they are illegal and havens for militants.

The bulldozers came for Mirjan’s slum by a railway line in the city’s south last Monday, transforming hundreds of shacks into a sea of rubble. The 70-year-old, with grey hair and pale blue eyes, saw the Capital Development Authority (CDA) demolish her meager world in a matter of minutes.

“I have been living here for the past 40 years. The CDA has completely ruined me. I am a widow, my husband died 20 years ago, my two elder sons also died,” she said, stifling sobs. “I am a poor woman—why did the CDA not listen to me?”

More than two-dozen slums are tucked into the corners of Islamabad’s neat grid pattern. They house tens of thousands of people unable to afford the city’s high rents, in flimsy dwellings put up with concrete, bricks and sacking. Some are located on drainage cuts designed to channel away the heavy rains of the monsoon, and many have no access to electricity, gas or mains water supplies.

The CDA, the city’s administration, has now drawn up a list of 14 such settlements it says are illegal and plans to clear—with no compensation or rehousing plan for the residents.

The demolition of Mirjan’s slum came after a bombing at a nearby fruit and vegetable market killed 22 people—the deadliest attack in Islamabad since 2008.

Pervaiz Masih, who lives in a Christian slum, says the community is frightened. “We have no land or other property to move to, we cannot build houses even if the government gives us land as we have no money,” said Masih, tears rolling down his cheeks. “This locality was not built overnight. If it is illegal, why did CDA officials not stop the people when they started building?” he said, accusing officials of taking bribes to let the settlement stay.

Aasim Sajjad, chairman of the All Pakistan Katchi Abadi Alliance, said the city’s elite enjoyed a cossetted life waited on by maids, cooks and chauffeurs drawn from the ranks of the slum-dwellers. “These are working class populations, they are the ones who make this city run, the construction workers, the drivers, the cooks, in the case of the Christians they are mostly the cleaners,” he said. “Let’s say you clear all these settlements. In about a month they’ll be up in various forms again because these people are not going to disappear—they are going to live somewhere.”

That somewhere is the suburbs, where properties can be rented for Rs. 3,000-5,000/month, according to Shaista Sohail, a senior official with the CDA. Not a huge sum by some standards, but substantial enough in a country where low-skilled workers can often earn less than Rs. 10,000/month, which must also pay for transport and other living expenses.

Anger at the CDA is starting to brew in the slums—demonstrations have been held to try to stop the bulldozers. “I have no Kalashnikov, no pistol, we are peaceful, I hope to Jesus they will never come here,” said Youssaf Masih Bhatti, the pastor of one Christian community. And if the bulldozers do come, said Pervaiz, “if they say they will crush us, we will stand in front of them.”

Obviously, some well-connected Muslim developers paid a large bribe to city officials to have the slums cleared of dwellings and people, so that these developers can create new housing or business buildings. And, in the mind of the Muslim officials and developers, if the people forced out are predominantly Christian, so much the better. And, so goes this is a long line of governmental and societal abuse of Christians. O Lord, have mercy on these people, and give them “a future and a hope..” (Jeremiah 29:11ff).

If you lived in Islamabad, you would know that the oppressed in this case are both Muslims and Christians. Quite frankly, when “governmental and societal abuse” occurs (as you so eloquently phrase it), the religion of the vulnerable has never mattered.

Amen to your prayer.