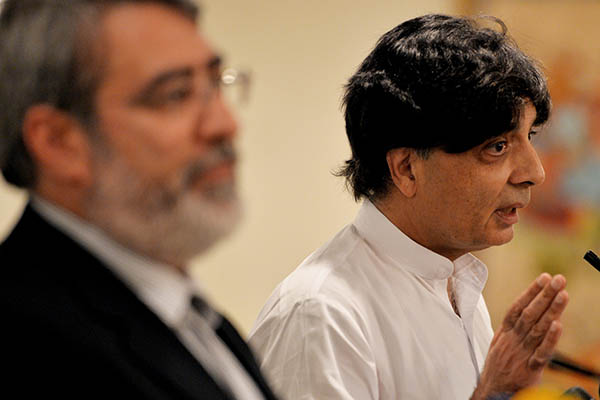 Interior minister says a hotline will be set up between Pakistan’s Frontier Corps and Iran’s Border Security Force.

Islamabad on Tuesday strongly denied that five kidnapped Iranian border guards were ever on its soil, amid fresh efforts to improve fractured ties before Prime Minister Nawaz Sharif’s visit to Tehran.

Relations between the neighbors hit a low following the kidnapping by Sunni extremists of five Iranian border guards from Iran’s Sistan-Baluchestan province, which adjoins Pakistan, in February.

Four of the soldiers were eventually freed and returned home in April. Officials say the fate of the fifth soldier is unknown but he is assumed to have been killed.

The Jaish-ul-Adl (“Army of Justice,” in Arabic) rebel group, which says it is fighting for the rights of Sunni Muslims in Shia-majority Iran, said last month the fifth guard had been executed in late March.

Interior Minister Chaudhry Nisar Ali Khan denied the abducted men had ever crossed the border. “Let me reiterate very categorically that those five Iranian guards were never ever present in Pakistan,” he said. “So the question of fifth one being in Pakistan is out of question.”

Khan was speaking at a joint press conference in Islamabad with his Iranian counterpart, Abdolereza Rahmani Fazli. Fazli arrived in Islamabad Sunday on an official visit ahead of Sharif’s two-day trip to Tehran, which begins on Sunday.

Fazli, who in March issued a veiled warning to Pakistan over the abduction, said Tehran had given Islamabad “images and documentation regarding terrorist activities” of the group involved.

The two sides have agreed to set up a hotline between Pakistan’s paramilitary Frontier Corps and Iran’s Border Security Force, Khan said.

The issue is likely to feature during Sharif’s visit, which includes meetings with President Hassan Rouhani and spiritual leader Ayatollah Ali Khamenei.

Regional issues including Syria will also come up for discussion as mainly Sunni Pakistan attempts to balance its relations between Shia-dominated Iran and Sunni-Saudi Arabia, analysts say.

Since coming to power last year, Sharif’s government has pivoted towards Saudi Arabia, which granted his country a $1.5 billion loan in March. The loan contributed to a major recovery of the rupee. Further straining ties, Sharif’s government in February announced it was suspending work on a $7.5-billion pipeline for Iranian gas exports on which work began in 2010.