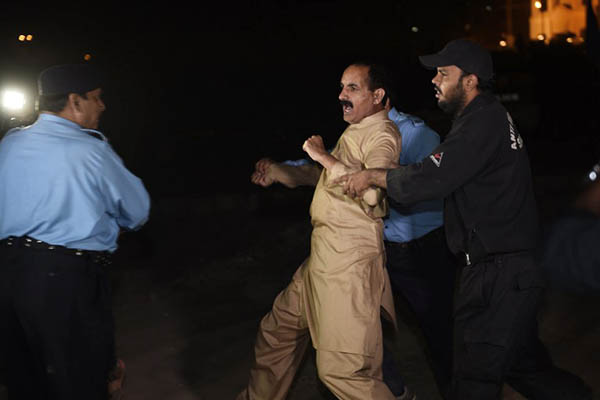 The opposition Pakistan Tehreek-e-Insaf party, planning a major anti-government protest on Nov. 2, was raided by police on Thursday as authorities banned all public gatherings in Islamabad for two months.

PTI leaders were infuriated by the police raid, further fraying relations ahead of the planned protest. “The government has proved that there is no democracy in Pakistan, it is a monarchy,” PTI lawmaker Asad Umar told reporters from the scene. Nazish Altaf, a PTI youth leader, added: “We will not be deterred by arrests and more people will join us on Nov. 2.”

There will be a heavy police presence in Islamabad to deter protesters, with confrontation now appearing inevitable. Sharif is under growing pressure from opposition parties over his children’s offshore bank accounts that were revealed in the Panama Papers leak.

“This will be a decisive and historic gathering, people will come together with resolve to hold the prime minister accountable,” Khan told reporters ahead of the raid. But a notification on Thursday banned gatherings in the capital for two months because protests were “likely to threaten public peace and tranquility, cause public annoyance or injury, endanger human life and safety.”

Khan later vowed there would be protests against the crackdown across the country on Friday and challenged the government to arrest him. “Tomorrow I will protest throughout Pakistan, our workers will protest throughout Pakistan—especially over the way women were mishandled,” Khan told reporters. “If [the] government wants to arrest me, they may go ahead, but for how long they can keep us inside, we will again hit roads after our release.”

Khan led a previous mass protest in the summer of 2014 that lasted four months, allying himself to populist cleric Tahir-ul-Qadri to back a sit-in in front of Parliament calling for the government to resign over election rigging allegations.

Next month’s planned protest comes at a sensitive time for Sharif, with the Supreme Court due to start hearing a case into the Panama Papers revelations about Sharif’s family involvement on Nov. 1. The Sharif government’s relationship with the Army is also at a low ebb following the publication of an embarrassing report this month that said civilian officials had clashed with the military over its alleged covert support for proxy fighters.

The Army has used the pretext of civil unrest to unseat governments three times in Pakistan’s history and some analysts believe Sharif may be forced to strike a deal that would appease the military to ensure his survival. “The severity of the threat to Sharif is a product of the civil-military divide,” said The News columnist Mosharraf Zaidi, adding the military would like to see the government fire officials responsible for the leaked report. “If he survives with his cabinet as is, it will represent a major victory for him. If he is forced to sacrifice members of cabinet to assuage challengers to his government—he will be seen as having been weakened,” he added.

Pakistan’s NCOC Warns of Another Lockdown