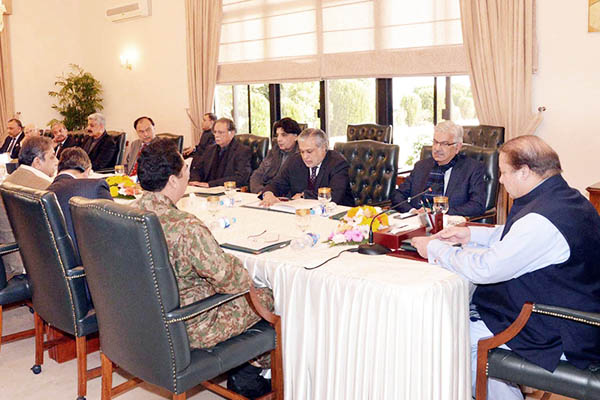 P.M. Sharif assures meeting military courts will only be used to prosecute terrorists.

The Government of Pakistan on Tuesday reviewed its strategy to block terror financing and disrupt militant communication networks as part of the implementation of a national counter-terrorism action plan, officials said.

“We have isolated terrorists with our unity and will make sure that we remain united against those who killed the innocent children,” Prime Minister Nawaz Sharif was quoted as saying in a statement issued by his office after he chaired the high-level meeting. He was referring to the country’s worst ever terror attack, a massacre carried out by Taliban militants on an Army school in Peshawar earlier this month which left 150 people dead, mostly children.

Pakistan has ramped up its anti-terror strategy in the wake of the Dec. 16 slaughter.

“Our fight is with the forces of hatred, violence and intolerance … We cannot betray our martyrs by giving a picture of disunity and shall win this fight as a nation,” Sharif said.

The prime minister has announced the establishment of military courts for terror-related cases in order to accelerate trials, and he has also lifted a six-year moratorium on the death penalty, reinstating it for terrorism-related cases. Officials said early last week that Pakistan plans to execute around 500 militants in the coming weeks.

Sharif told the meeting—attended by intelligence officials, the ministers of defense and finance and the Army chief, among other high-level officials—only those cases that relate to terrorists responsible for mass murder of innocent civilians, children and soldiers of law enforcement agencies would be referred to the special courts. “Special courts are part of the national action plan and an extraordinary solution to an extraordinary problem,” Sharif added.