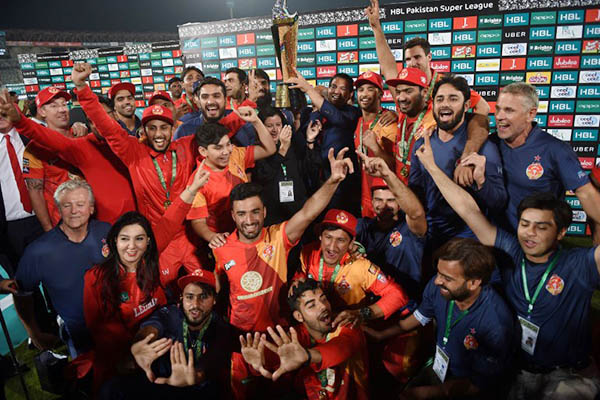 The stands of Karachi’s National Stadium roared with chants from a packed holiday crowd as international cricket returned to the Pakistani metropolis after a nine year break with the final of country’s Twenty20 league on Sunday.

The Pakistan Super League (PSL) final—in which Islamabad United beat title holders Peshawar Zalmi by three wickets—is seen as a major step toward reviving international cricket in the country, suspended since 2009 attacks on the Sri Lankan team bus in Lahore.

The attacks left Pakistan cricket forced into exile, with international teams refusing to tour the terror-hit country over security fears and the national team left to play its home matches in United Arab Emirates.

The first 31 matches of the PSL were again played in Dubai and Sharjah before the two play-offs in Lahore, highlighting the improvement in security situation after military operations in the troubled northwest of the country.

Islamabad, who won the title in the inaugural year in 2016, rode on a brisk 26-ball 52 by Luke Ronchi spiced with five sixes and four boundaries, which anchored his team’s successful chase of 149-run target in 16.5 overs. Ronchi also finished as top run-getter with 435 runs in 11 matches. Asif Ali smashed three sixes in his 26 not out.

Peshawar Zalmi faltered in their batting after winning the toss as their top scorer of the league Kamran Akmal managed just one off nine balls. Chris Jordan top-scored with 36 while Andre Fletcher scored 33 and Wahab Riaz made 28 not out. Spinners Shadab Khan took three and Samit Patel chipped in with two wickets.

Karachi became the second major venue to host international matches after Lahore hosted five international matches against Zimbabwe in 2015, as well as the PSL final in March last year, three World XI matches in September and one against Sri Lanka a month later. Sunday’s final was watched by a packed 33,000 crowd, including Pakistan’s prime minister Shahid Khaqan Abassi.

It will be followed by three Twenty20 internationals against reigning World Twenty20 champions the West Indies on April 1, 2 and 3—all in Karachi.

PCB Chairman Najam Sethi said more cricket would follow. “It’s a historic occasion as Karachi is hosting a match after a nine year gap,” said Sethi before the final

Giles Clarke, director of International Cricket Council (ICC), praised Pakistan’s efforts. “Sethi is very courageous in his decision making,” said Clarke, also the head of Pakistan Task Team formed to help revive international cricket in Pakistan. “Let this final be successful and we look forward to more matches. It’s great that West Indies are coming here and that was important and I look forward to more teams coming and more grounds hosting matches in Pakistan.”

Fans weathered suffocating security arrangements, with 8,000 policemen and paramilitary staff guarding the venue and the various checkposts in and around the stadium. “Today is a historic moment for us that the cricket has returned to Karachi,” said Saqlain Sher, an employee at a telecommunication company. “This match will send a positive image of Pakistan across the world.”

Another fan Rida Waqas was elated as she walks across the walk through gate. “I am so happy that so many people have come and the security is good too,” said Rida. “We invite everyone to come and play in Pakistan.”

The last match Karachi hosted was a Test between Pakistan and Sri Lanka in February 2009, a week before the visitors were attacked in Lahore.