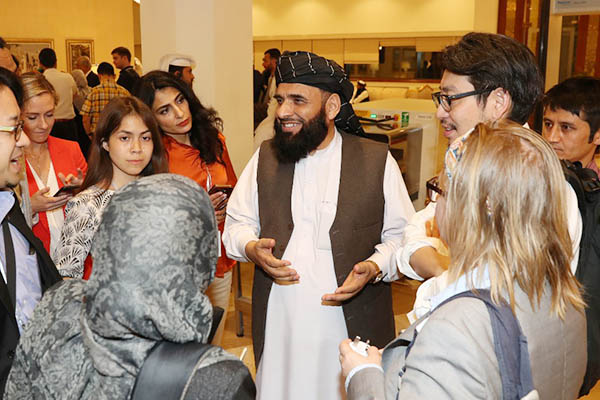 Suhail Shaheen, the spokesperson for the Taliban’s political office in Qatar, on Sunday stressed that establishing an Islamic Emirate in Afghanistan was a “legitimate” right of the country’s citizenry.

In a wide-ranging interview with Geo News journalist Saleem Safi, the spokesperson said that the Taliban had no issues with other governments and they should similarly not try to impose their views on the insurgents. “This is not in accordance with international principles,” he said.

To a question on how the Taliban viewed Pakistan’s role in the ongoing peace process, he said that Islamabad was welcome to help bring about a negotiated settlement between Kabul and the insurgents, but it could not “dictate to us or impose its views on us.” Stressing that the Taliban wanted “brotherly relations” with Pakistan based on shared values, he noted that any form of “dictation” was against international principles.

On whether the Taliban considered the banned Tehreek-e-Taliban Pakistan (TTP) opponents or assets following their pledge of fealty to Mullah Haibatullah Akhunzada, Shaheen said he was not aware of this. However, he added, the Taliban’s policy was not to allow the use of Afghan soil against anyone.

To a question on the Taliban’s relations with India, Shaheen said they expected Delhi to remain impartial in the struggle to establish an Islamic Emirate. Alleging the incumbent government in Kabul was “imposed after occupation,” he said India should align itself with the people of Afghanistan rather than an “imposed government.”

On reports of the Taliban sweeping through government-controlled regions and retaking them by force, the spokesperson said the insurgents believed in a negotiated settlement and were continuing intra-Afghan talks in Doha in pursuit of this goal. However, he added, a “few provinces” had seen “new developments” because their security forces lacked confidence in the leadership of Kabul. “They are voluntarily joining our ranks. Not as a result of war,” he claimed, stressing this wasn’t surrender.

He alleged that many of the troops who had laid down arms in recent days had never supported the Afghan government, but had feared bombardment by foreign troops if they attempted to join the Taliban. “But after they [foreign troops] left, they joined us and now in six weeks we have taken over 170 districts approximately,” he claimed.

Addressing reports of negotiations stalling due to President Ashraf Ghani being uninterested in talks, and the Taliban believing they would secure control of the country regardless, Shaheen claimed Kabul was unwilling to show flexibility in the dialogue. “This is the truth. The Doha deal said that within three months all prisoners would be freed. But this has not happened. They have not helped us in de-listing from the black list either,” he told journalist Safi. “Our policy is that of durable peace in Afghanistan. This was not possible until we speak to all the divisions in Afghanistan,” he said, adding that the Taliban believed no party could alone rule peacefully over the country.

Claiming that the Taliban wanted to focus on rebuilding Afghanistan without foreign interference, he said the insurgents were willing to debate their demand for an Islamic Emirate. “A negotiated form of government is acceptable but we have stressed that the system must be an Islamic system because our struggle for the last 20 years has been about this,” he added.

To questions on whether Afghans should expect a return to the Taliban rules of men being required to grow beards and women wearing full veils in public, Shaheen claimed the insurgents did not oppose technology and science.

“We are not against technology and science. It is necessary even by Islamic standards. We will just ensure content is according to Islamic values, the demands of our people, our history, and culture,” he said, describing information technology as a “weapon” that was also benefiting the Taliban.

He said the Taliban had already announced that media outlets and schools would face no additional curbs, but would have to “moderate” their content “in accordance with our values.” He added that they did not wish to impose an Islamic dictatorship. “Women’s basic rights will be ensured. Access to education and work will be provided,” he said.