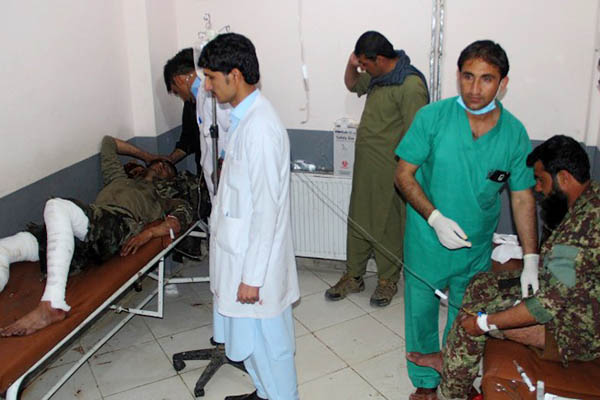 The Islamic State militant group on Saturday claimed a suicide attack inside a packed mosque on an Afghan army base that a senior government official said killed at least 27 soldiers.

At least 79 military personnel were wounded in the attack on the First Brigade of the 203 Army Corps in the eastern province of Khost during Friday prayers, according to casualty figures from public and private hospitals in the provincial capital.

In a statement posted on the I.S. news site Amaq, the group’s Afghan franchise claimed 50 were killed and 110 wounded in the attack. It warned “more devastating and bitter” assaults were ahead. But a government official said on Friday on the condition of anonymity that 27 soldiers had lost their lives and 44 had been wounded.

Provincial governor spokesman Taliban Mangal said on Saturday that 13 soldiers had been killed and “about” 40 wounded.

Afghan government and military officials are often suspected of downplaying the casualty tolls in militant assaults.

The bombing follows a wave of deadly attacks across Afghanistan in recent weeks as militants step up violence amid a flurry of diplomatic efforts to end the 17-year conflict.

Presidential spokesman Mohammad Haroon Chakhansuri told reporters on Saturday that the Khost attack was similar to the Taliban-claimed assault on a mosque and dining hall inside a military base in the northern city of Mazar-i-Sharif in April 2017 that killed at least 144 troops. “We are seriously investigating it,” Chakhansuri said. “Those who have neglected their duties will be prosecuted.”

It has been a bloody few days for Afghanistan.

A U.S. soldier was killed on Saturday, NATO said, taking the number of American service personnel to die in the war-torn country this year to nine. That came after at least 55 people were killed and 94 wounded when a suicide bomber blew himself up in the middle of a religious gathering in Kabul on Tuesday.

No militant group has claimed the explosion at the Uranus Wedding Palace, where hundreds of religious scholars had been marking the birthday of Islam’s Prophet.

Friday’s explosion in Khost came as Afghan security forces suffer record casualties, which experts warn have reached unsustainable levels as the Taliban maintain the upper hand in the war.

Since the start of 2015, when local forces took over from U.S.-led NATO combat troops to secure the country, nearly 30,000 Afghan soldiers and police have been killed, President Ghani revealed this month—a figure far higher than anything previously acknowledged.

U.S. envoy Zalmay Khalilzad expressed hopes in Kabul last Sunday that a peace deal to end the war could be struck before the Afghan presidential election, scheduled for April 20. His comments underscore an apparent increasing sense of urgency in the White House and among American diplomats for a peace deal to be done quickly.