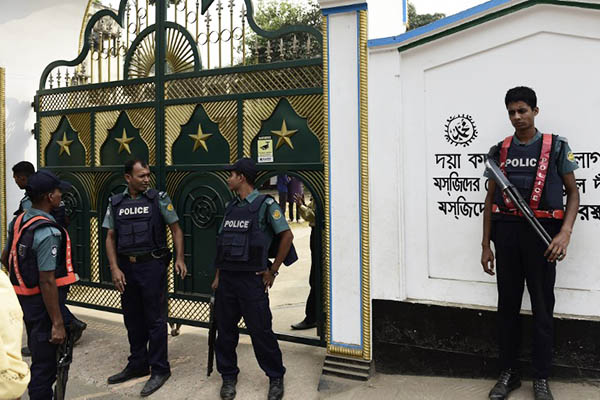 The Islamic State group on Saturday claimed responsibility for an attack at a mosque of the minority Ahmadi Muslims in Bangladesh, in which the suspected bomber died and at least three others were injured.

U.S.-based monitoring organization SITE reported that the I.S. group, which has claimed responsibility for a number of recent attacks in Bangladesh, said it had targeted worshippers during Friday prayers. The bomber detonated an explosive belt at a mosque of the “polytheist Qadiani sect,” a derogatory term for Ahmadi Muslims, the monitoring organization quoted I.S. as saying.

According to the statement “dozens” of worshippers were injured or killed at the mosque in Bagmara, but police said on Friday only three had been injured.

The bomb blast at the Ahmadiyya Muslim Jamaat mosque occurred as nearly 100 people were gathered for Friday prayers, police said.

I.S. has claimed a series of recent attacks in Bangladesh, including the shooting of three foreigners, two of whom died, and the killing of a Sufi Muslim shrine chief in November. The jihadists also claimed an attack at a Shia mosque in the north of the country last month in which the muezzin was killed and three worshippers injured—though some experts have expressed skepticism about the claims.

Analysts say Islamist extremists pose a growing danger in conservative Bangladesh and that a long-running political crisis has radicalized opponents of the government.