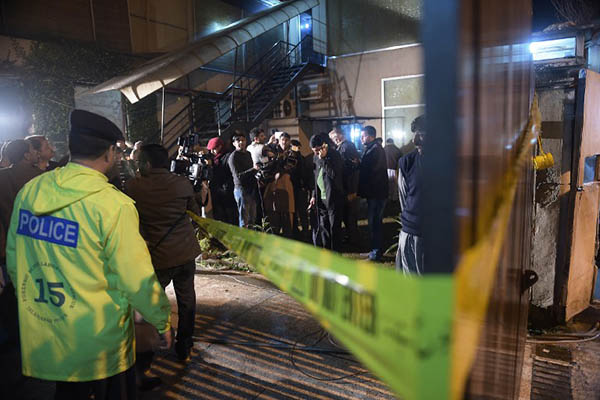 The Islamic State group said Thursday it was behind an attack on a Pakistani television station that injured one person, in a claim warning the media against “concealing facts.”

Two assailants on a motorbike threw an explosive device that appeared to be a grenade and fired gunshots at the ARY TV offices in Islamabad late Wednesday, but fled when security guards fired at them, the station said on its Facebook page. One employee was wounded when his head was struck by shrapnel, the station added.

Pamphlets in Urdu and English tossed by the attackers during the assault urged media not to side with “apostate Army and Government of Pakistan in their global crusade against Islam… by concealing facts.” A radio broadcast from the Islamic State group later claimed the assault.

Police said no arrests have been made so far and that they were probing the attack. “We are busy with investigations and have found some leads and are working on them,” said local police station head Sajjad Bokhari. He added that police were not sure that a grenade had been used and they were trying to confirm the nature of the device.

Reporters without Borders (RSF) on Thursday called upon Pakistani authorities to respond to the attack on ARY “swiftly.”

“We reaffirm our support for ARY News and all of its staff,” Benjamin Ismaïl, the head of RSF’s Asia-Pacific desk said in a statement. “As well as providing the TV channel with better protection, the authorities must take measures to prevent men armed with weapons of war from circulating in the capital,” he said. “We also totally reject the justification given by this attack’s instigators. The media are not military targets and the use of armed violence against them can only be described as horrifying attacks on media freedom.”

Security analyst Amir Rana said the Islamic State group is trying to bolster its foothold in the country by ramping up attacks and called on Pakistan to do more to curb their influence. “At the moment their visibility is low, so it is the time for authorities to move swiftly against I.S. people before they launch any big attack,” he said.

Police said in December they arrested eight suspected I.S. extremists after a raid in Punjab, accusing them of planning attacks. In May last year, the jihadists claimed responsibility for an assault that killed at least 43 members of the Shia Ismaili minority in Karachi.

Islamabad has officially denied the Islamic State organization is operating in Pakistan, but authorities have expressed fears the extremists could find recruits among the country’s myriad Islamist militant groups.