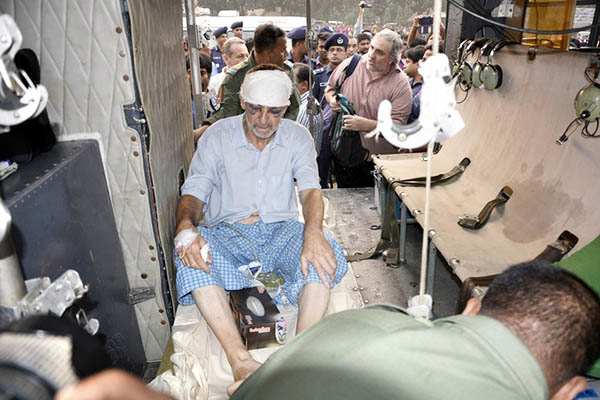 Bangladesh police claim they have no concrete evidence of who targeted Piero Parolari.

The Islamic State group on Thursday claimed responsibility for shooting and wounding an Italian priest in Bangladesh this week, the latest in a spate of recent attacks on foreigners claimed by the jihadist network.

Piero Parolari, a priest and doctor who worked at the Suihari Catholic Mission in the northern city of Dinajpur, was shot at close range by three gunmen on a motorbike on Wednesday.

“Security detachments of soldiers of the Caliphate in Bangladesh carried out some unique operations [including]… Targeting the Italian Crusader foreigner Piero Parolari,” the jihadist monitoring organization SITE quoted I.S. as saying in a message posted on Twitter. The priest’s shooting followed the murders of an Italian faith-based aid worker in late September and a Japanese farmer last month, which were also claimed by I.S.

An I.S. radio bulletin also quoted by SITE on Thursday said: “An Islamic State cell tracked and targeted an Italian crusader missionary on his way to work… shot him multiple times, leaving him critically wounded and subsequently hospitalized.”

Bangladesh police said they had no proof who was behind Parolari’s shooting in Dinajpur. “Unless we can find out who has actually executed the operation, we can’t say who or which group was behind the attack,” said Dinajpur police chief Ruhul Amin.

The attack on the priest bore “some similarities with the previous attacks on foreigners,” who were also shot by gunmen riding on motorbikes, he added.

Aged in his 60s, Parolari has been based at Suihari Catholic Mission in Dinajpur for more than 30 years, according to another priest, Anthony Sen, who lives in the same city. Bangladesh authorities have previously said there is no evidence that Islamic State militants are active in the country.

According to SITE, I.S. on Thursday also claimed the shooting of a Baha’i community faith leader and the killing of a Sufi Muslim shrine chief earlier this month in Rangpur, close to where Parolari was shot.

Police officials however told AFP they believed “internal disputes” were behind the deaths of the Baha’i and Sufi leaders.

Bangladesh has been reeling from rising Islamist violence in recent months, including a series of machete murders of secular bloggers and a publisher, claimed by a local Islamist group. I.S. has claimed responsibility for stabbing a group of police in Dhaka this month, killing one, as well as a blast at a major Shia shrine in October, which left two people dead. Police have blamed a banned local Islamist outfit for those attacks.

Prime Minister Sheikh Hasina’s government launched a crackdown on local Islamist groups this year after facing Western criticism of failing to stop the bloodshed. Bangladesh’s highest court this week upheld the death sentences of two opposition leaders including a top Islamist, convicted for atrocities during the 1971 independence war against Pakistan, sparking fears of violence by their supporters.